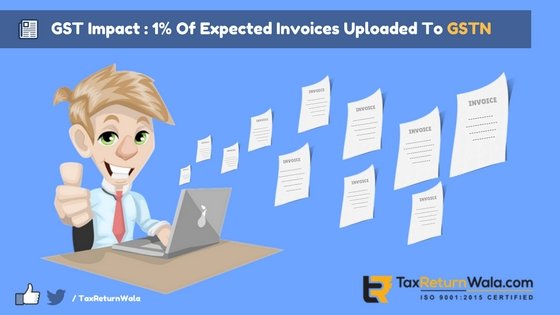 1% Of Expected Invoices Uploaded To GSTN

Till now, only 4.4 million GST invoices have been uploaded as part of the GSTR 1 return filing, a facility that became operational on July 5. A GSTN official said that at least 440 million GST invoices should have been uploaded. The facility is open for 38 days, but only 1% of the expected goods and services tax invoices had been uploaded on the GST Network more than a month after the facility opened. In last-minute filing, taxpayers will commit errors and the system will not accept the return. Taxpayers would then seek an extension for the same.

Another GSTN official stated that they would  consider extending the deadline if people face genuine difficulties in filing GSTR 1. The GSTN does not allow rectification or modification in returns submitted but not filed, making it a better option to wait.

Some people said that there are cases where punching errors have increased the tax liability of assessees by crores of rupees, resulting in significantly high cash flows because the returns cannot be submitted without paying tax. In addition, there is an issue with the GSTN recognizing existing SEZ units that migrated to the GST.

The last date to file provisional return GSTR 3B was extended from August 20 to August 25 after taxpayers faced difficulties in filing. So far, 39.7 million returns have been filed by the 5.95 million entities registered for the GST in July, excluding those under the composition scheme. Based on this, 20-25% of those registered have not filed tax returns.

Experts pointed out those taxpayers who were grappling with GSTR 3B, the self-declaration form, for the first two months. This did not give them enough time to upload GST invoices, they added. People were busy filing GSTR 3B. They will start uploading GST invoices now.

Get Connected to a TaxReturnWala Expert