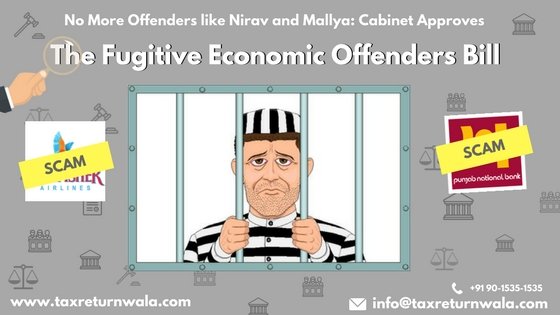 Being opposed by critics on the highly aired issue of PNB Scam and Nirav Modi flee out of the country, the Cabinet recently made its concern to approve the Fugitive Economic Offenders Bill, 2018 for confiscating assets of all those who run out of country without getting into account and later getting acknowledged under list of economic offenders.

The bill aims at seeking all those, who fly overseas without getting caught of making an economic loss to banks and government. The proposed law certainly provides an ‘effective, constitutional and expeditious process of bringing up all actions and a call for quick steps against such culprits. It guides for remedial options for confiscating fugitive assets of defaulters without conviction and paying off the lenders by selling those fugitive properties.

Defining applicability of Fugitive Economic Offenders Bill, 2018 it was proposed to bring ambit of all offences with money involvement of Rs 100 crore or above to the act and bound all economic offenders to face trials under the Money laundering Act.

Seeking to media views on this, Finance Minister Arun Jaitley said ‘the bill will be introduced in the upcoming session of Parliament. The provisions of the bill will apply for economic offenders who refuse to return. Persons against whom an arrest warrant has been issued for a scheduled offence as well as willful bank loan defaulters with outstanding over Rs 100 crore. So, the fugitive bill is for the fugitives who escape the country’

Quick Highlights of the Bill

The first call for the Fugitive Economic Offenders Bill, 2018 initiated during Budget FY 2017-18 speech of Finance Minister, considering the case of Vijay Mallya who flee of the country taking 9000 crores appropriated in Kingfisher Airline fraud. Major policies of the act to be relying on confiscating assets of economic offenders with legislative measures.

The Bill has scripted legal definition of an offender to be ‘a person against whom an arrest warrant has been issued for a scheduled offence and leaves the country without prompting to any legal notice’. The fraud value jurisdiction under the act would be Rs 100 crore or above, while the offender will only be given a period of 6 weeks to comply with such allegation.

On passing of the bill from both the houses, the approved legislation will restrict offender from defending any civil claim, also it will prevent the offender to retrieve any confiscated property if he returns back to India.

The act empowers the government:

Relating ease of getting hold on benami properties of defaulters,Mr. Jaitley said, “We see that a new set of assets of the fugitives are discovered that are not with banks. There has to be a mechanism that we can immediately take over these assets.” For confiscation of overseas assets, the government will set up a mechanism for international cooperation.

Also, for attaching international assets, we need the help of overseas authorities. India will need to make appropriate arrangements with other countries to confiscate these properties. That will be the next avenue of cooperation,” he added.