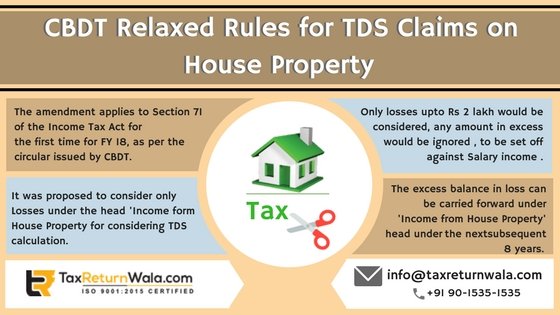 Seeking to the tax filing season, leaving no extra day another important amendment has been crafted by CBDT (Central Board of Direct Taxes) in the Income Tax rules.

The amendment has been scripted in Section 71 of the Income Tax Act, according to which ‘an employee on declaring a loss higher than Rs 2 Lakh under the head ‘Income From House Property’, would not be legible to claim a TDS deduction on excess amount stated above Rs 2 Lakh while computing his Income from salary.

In an annual circular issued by CBDT, various key amendments were pointed for consideration of employers who are computing TDS against salary income. It was also stated that the amendment so announced would be applied for the first time from 2017-18.

In a usual way, an employee is permitted to provide details of  income sources other than his salary income like bank interest, home rent receipt etc that he/she has earned during the year, altogether with the TDS amount (Tax deducted at source) which has been already deducted like ‘TDS deducted by bank’ etc. Similarly, cases of losses declared by employees from other sources are also reported. However, only loss from house property head can be considered by the employer as stated by the employee for computing TDS to be deducted at the stage of salary computation each month.

Also, making such a declaration is not mandatory. But, If an employee does so he/she shall have to separately compute and pay off advance taxes, as the employer will be deducting TDS on taxable income of employee based on the details provided by him including his salary income particulars.

The loss amount as generally seen, calls out to be the difference between Interest paid on Home loan of property which is rented out and the amount of actual rent received from it, when the employee has let out his/her property for second income source (being also a case of second house owned & rented to someone). Earlier, there was no such cap confining of losses for setting them against salary income. With the capping of limit in Finance Act, 2017 to Rs. 2 Lakh, the balance loss if any would be carried forward to settle them off only against Income from House Property in the next consequent eight years.

While ripping to benefits of amendments, ‘the employee has also to consider that on reporting loss of more than Rs. 2 Lakh, they have to undergo a higher tax block for the year 2017-18, so employers need to carefully ensure that the set off as made against salary income is adequate and is adjusted accordingly to the extent of Rs. 2 Lakh. Any excess or deficit in TDS computed in earlier months can be adjusted by increasing or decreasing subsequent deductions during the same financial year. Hence, in 2017-18 any rectification in TDS can be done in respect of salary for the coming three months.

ITR Not Filed Yet? Hurry! Not Much Time Left…