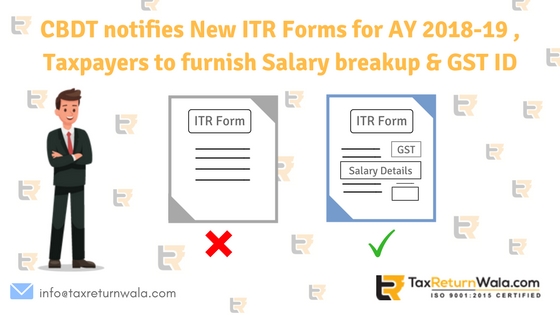 To initiate new financial year with a specified amendment in tax filing policy, CBDT (Central Board of Direct Taxes) has recently announced for a new tax filing pattern for assessment year 2018-19. CBDT stating acceptance of good number of new taxpayers in 2017-18 subjected the need for bringing in the New ITR forms for the coming assessment year 2018-19. CBDT told  that these forms will simplify ways for a taxpayer and will present a complete breakup of his salary income and GST details of business , which will give work for direct reporting of deductions availed and all the business turnovers furnished till date to government.

While no major changes have been done to the 7  ITR forms, they all have been added with additional requirement of details of taxpayers of their income sources . In a statement released by CBDT,  it was stated that all New ITR Forms are to be considered and are to be mandatorily filed by every taxpayer electronically other than giving exception to few taxpayers.

The new simplified ITR form -1 (Sahaj) is slightly  a modified version of previous year ITR form. It will specify all details about salary heads of an assessee in separate fields including details of allowances, exemptions allowed and claimed, perquisites, profits in lieu of salary and deductions claimed under section 16. These details were earlier specified in form 16 of salaried employees. In the statement , CBDT also said that Sahaj form will make the tax way simpler for salaried people and would be used by over 30 million taxpayers.

– Income from other source like lottery,interest or lucky draws

– In cases of clubbed income of spouse or a minor with the taxpayer , if the income limits to above threshold.

CBDT made the following changes just at the beginning of the new financial year to help taxpayers simplify their computations and begin with tax filing process. Other than making  minor changes in above New ITR forms, CBDT also eased requirement of furnishing of details of cash deposits made in the year ,which was as required in AY 2017-18 but not to be taken in  AY 2018-19.

While the due date for filing for the coming return session is four months from now, it is better to get all your tax dues cleared at earliest, else you might get penalise under section 234F which might lend you in various penalty issues.