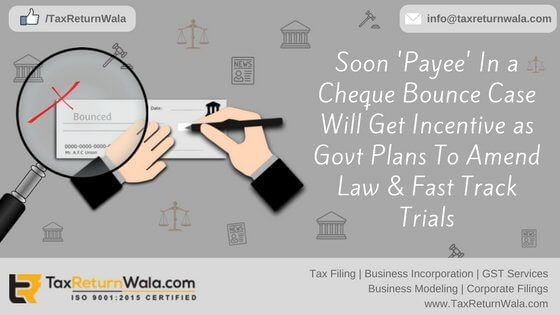 Soon ‘Payee’ In A Cheque Bounce Case Will Get Incentive As Govt Plans To Amend Law, Fast Track Trials

Delayed process of dealing with bounce cheque cases has made Modi government to stand and call for a change in the present law. It has been indicated that soon the government will come up with a much stronger law which would save the payee from hardships caused by penalties of banks on cheque bounce cases and delayed delivery of payment from the drawer of a cheque.

For the purpose, the government will act on the Negotiable Instrument Act 1881 to bring a crucial amendment. On Friday, the Union IT Minister Ravi Shankar Prasad stated the proposed change to be a ‘historic decision’ and to be in circulars of Union Cabinet soon in a recent conference held at his location.

“Among them is the one related to the cheque bounce cases,” Prasad abbreviated. He also said that the government will work for setting up of a mechanism to fast-track trials related to such matters. The proposed stronger provisions will help public authorities to nail the culprits in shortest possible time. However, he was not clear on the proposed amendment, but some sources said that the amendment would enable the court to order interim compensation to the payee of the cheque, a part of the cheque amount to be paid at the trial stage from the drawer.

“For repeat offenders, there will be a stronger provision in the new law,” he further said. Apart from this government is looking for some better incentives for the person who has been cheated in such way.

Cheque bounce cases generally occur when there is no money in the account of the drawer of the cheque. The drawer branch then refuses to pay money to the payee, in whose name the cheque was issued and also adds some monetary fine on both the payer and the payee according to provisions of the Negotiable Instrument Act.

Also Read : No Income Tax! A Thrilling Thought To Be Taken Before Any Budget Announcement

1 thought on “Soon ‘Payee’ In A Cheque Bounce Case Will Get Incentive As Govt Plans To Amend Law, Fast Track Trials”