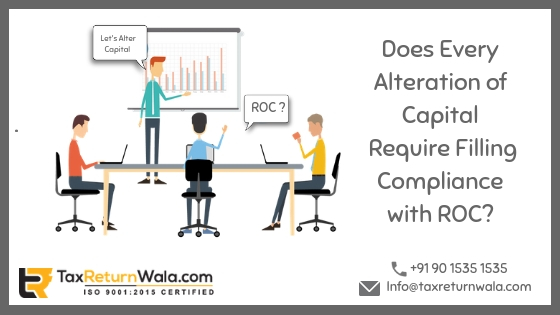 Does Every Alteration of Capital Require Filling Compliance with ROC?

Alteration of capital follows a sequential process. A change in Memorandum related to alteration can be of the form:

To register a new company, it is mandatory for all that all compliances get filed and authenticated by an authorized ROC (Registrar of Companies) appointed by government. He after all verifications grants his consent for major compliances of companies. Not only in registration of new companies but ROC also has a definite role to play while confining to major company compliances like registration of company trademark, making an amendment in AOA/MOA, addition or removal of directors etc.

Role of ROC in Forms of Alteration of Capital

Alteration of Capital : A company as per Section 94 , by passing a resolution of alteration in the general meeting can alter its capital clause in Memorandum in a way by :

-> Role of ROC: Notice post to makeing a change in share capital includes submission of notice to registrar within 30 days. ROC can impose a prescribed fine or penalty if such provision is not considered carefully.

Reduction of Capital: A company limited by guarantee or shares can anytime reduce its share capital with reference to Section 100 of the Companies Act. Share capital can be reduced by either:

->Role of ROC: After getting the order of capital reduction passed by court, it is further passed on to ROC along with minutes of general meeting of related decision for final conclusion. ROC then certifies the application of reduction by not considering whether the said clause is present in AOA/MOA or not.

Provisions Related To Reserve Capital And Reserve Liability: Reserve capital is a fixed proportion of capital to be kept as reserve till winding up of the company. The Reserve Capital so kept cannot be charged as security for loan, cannot be added to ordinary capital without court order & cannot be cancelled at the time of capital reduction etc

->Role of ROC: The application for transfer of capital to reserve status requires prior approval and certification of ROC. ROC grants for approval for creation of reserve capital based on minutes made in general meeting, the resolution passed and the court order.

Checking Variations of Rights of Shareholders: A company issues various classes of shares and also provide varied rights to each shareholder. If a company wants to share rights/duties/responsibility status of shareholders it has to take prior approval of ROC.

->Role of ROC: The written consent of about ¾th of the total share class holders is required to get court approval for change in role of shareholders. On receipt of consent it is to be submitted to Registrar within 30 days for certification .Any default made in such provision might impose big fine and penalties.

Thus, ROC has an inevitable role to play in all company compliances whether it is incorporation, changing role of directors, alteration in MOA/AOA or whether it is alteration of complete capital structure.