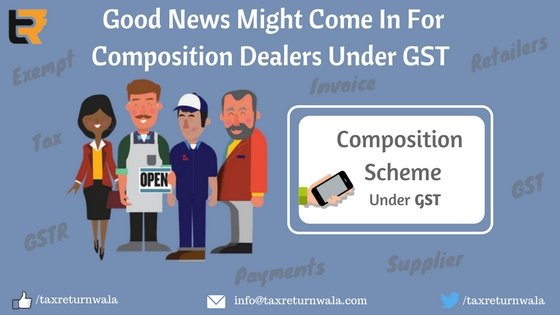 Good News Might Come in for Composition Dealers under GST Scheme

Easing compliances for small taxpayers, government is now all set to raise the ambit of benefits stored in the present composition scheme. Other than fixing up sector based flat rates it has been reported that the new scheme would be made more attractive by including interstate supplies of goods and benefits of availing input tax credit on them.

As stated, the Administrative panel led by Assam Finance Minister Himanta Biswa Sarma is expected to finalise changes in the revised structure while members of the Group of Ministers (GoM) would seek their feedback on the improvements.

It would be the second meet of GoM, which was held for a decision on reducing rates for restaurants from 18% to 12% while taking up their input tax credit facility. Seeking the discussion forward a state minister (member of the panel) said that ‘We will deliberately extend the decision to interstate state sales as there is a key demand from this sector’. Till now many small and medium players are hesitant about opting to the composition scheme worrying that this would end up their business with large players. ‘This needs a rectification’ he added.

The ministry of small and medium enterprises was asked to consider the industry and discuss what they expect from the composition scheme and what more can be done to it to make it more attractive.

Till now the composition scheme offers flat rates of tax, quarterly filing of returns and payment of 1% GST on trading/2% on manufacturer/5% on restaurants but they are not allowed of any input tax credit. Anyone availing the composition scheme benefits cannot claim input tax credit on goods bought, further they cannot undertake any interstate supply in order to opt for the scheme.

The Revenue Secretary Hasmukh Adhia said in one of his interviews that ‘With the aforesaid move,government is trying to ease compliances for small and medium entrepreneurs and will harmonise every chapter of the scheme whenever they find burden being shifted to small businesses and common man feet’s.