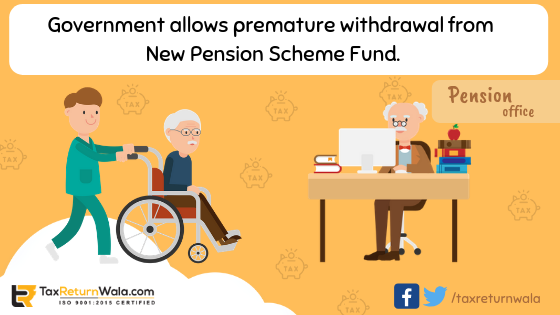 Before the upcoming budget session, the government has come up with a more relieving update for pensioners of the country. Allowing premature withdrawal from the New Pension Scheme Fund (NPSF), the government has now notified- that with effect from the proposed date of the ministry, any subscriber inclined to the National Pension System (NPS) scheme will now be eligible for three partial withdrawals during his period of subscription.

For questions raised in the Rajya Sabha for NPS, Shiv Pratap Shukla the Minister of State for Finance stated‘ with effect of the proposed changes, a subscriber will now be able to take an amount not exceeding twenty-five percent of the contributions made by him (excluding contributions made by the employer) in each of his NPS withdrawal. Also, there shall be no restriction on withdrawals made from the Tier-II account by the subscriber.

To apply changes with effect from August 10, 2017 Shukla said ‘keeping in view of the sudden financial needs of the subscriber, the minimum required period for availing partial withdrawal in the NPS (National Pension System ) has now been reduced from 10 years to 3 years and the minimum gap of 5 years between two subsequent withdrawals has been removed.’

In his statement, he also stated about the proposals and approvals of government proposed in December 2018 related to the choice of pension fund and investment patterns for Central Government Subscribers under NPS including:

Choice of Pension Fund: As per suggestions of the ministry, the Central Government Subscribers will be

– allowed to choose any of the appropriate pension funds including Private Sector Pension Funds.

– allowed to make changes to their choice of fund once in a year.

– allowed to opt for a combination of the Public Sector Pension fund (for both existing as well as new government subscribers.)

Choice of Investment Pattern: For Central government employees following investment options will be made available:

– an option to invest 100% of funds in government securities (Scheme G) for those who prefer a fixed return with minimum risk.

– an option to choose from life cycle based schemes for earning higher returns including the Conservative Life Cycle Fund Scheme which is capped at 25% at the age of 35 years to its maximum exposure, narrowing thereafter (LC-25) &

– The Moderate Life Cycle Fund Scheme which is capped at 50% at the age of 35 years to its maximum exposure, narrowing thereafter (LC -50)

If employees do not take any of the above options, the existing allocation of the funds shall continue as default.