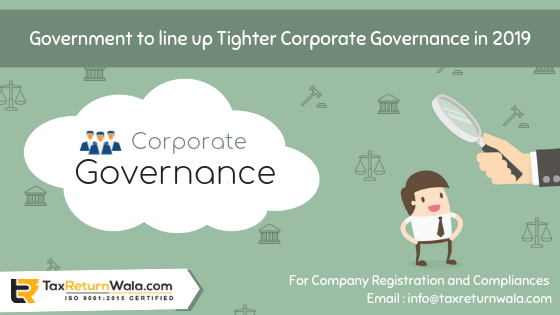 Government to line up Tighter Corporate Governance in 2019

In 2018, the corporate governance implied on regulators, shareholders and investors showed a turning heat. The resulting effect, made several large companies to explain and disclose more of their planning with management and promoters, also  their stand to investors more in brief.

Last year, big industry names including Yes Bank, Sun Pharma, and Fortis Healthcare came under corporate governance scanner. With changing governance policies and due to shareholder’s activism & social media, several sectors holding companies were forced to improve their governance standards, for keeping themselves safe from market value erosions and reported regulatory actions which were to be taken against them.

Keeping in voice investor’s sentiments after the IL&FS and PNB fraud crisis, The Ministry of Corporate Affairs (MCA) is looking forward to raise its governance standards and reforms in 2019. As per an official statement, MCA will strive to coordinate high standards of governance with ease of doing business. Ministry radars to bring change in the working framework of independent directors, norms for governing companies and norms relating to revoking of auditor regulations etc.

Affirming standard improvements in future, Corporate affairs secretary Injeti Srinivas said ‘the objective of raising standards is a necessity and it goes in hand with ease of doing business.’

Seeking for more improvements in the governance standards, Srinivas stated ‘There is a need and a room available for improvement in corporate governance. The key initiative of ministry to take in 2019 is de-criminalization of corporate offenses which at present are more technical and procedural in nature, under the company’s law. A non-discretionary e-adjudication platform will also be placed in the system soon.’

The Security and Exchange Board of India (SEBI) in 2018 also amended numerous regulations to facilitate corporate governance in the country and settled many serious & non-serious violations. In the last year only, SEBI settlement orders manifolded  about 3 times from 34 in 2016 to 200 in 2018. In May, SEBI amended its major listing regulations to plug out loopholes of many companies defaults.

Moreover, for the coming session, SEBI has listed some major regulations to raise standards of governance in the country which will take effect from 1st April 2019 and will include standards to

– limit age of a non-executive director to 75 yrs.

– stipulate that the chairperson should position as a non-executive member

– include at least a one independent women director.

Issues of corporate governance were too aired by social media this year. The note case of Macquarie which raised corporate governance issue in Sun Pharma and case of Yes Bank Chief Rana Kapoor who took to investors concern on Twitter to not to sell his shares in Yes bank even after his demit from office, both cases were widely circulated on WhatsApp and other social media. Even whistleblowers counted a rise in complaints of regulatory violations. As per the NIFTY Annual report, about a third of NIFTY 50 companies got 3508 whistleblower complaints in 2018.

‘To compare with 3,139 in 2017, SEBI and Ministry of Corporate Affairs till today has pumped up several regulations for corporate governance, but it still seeks acceptance from management as a good advice’ said SHAH of Kotak AMC. We are at a stage of evolution, we have covered some distance though but still, there is a long way to go …’ he further added.