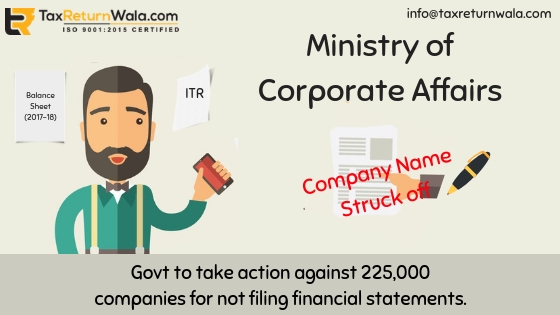 Govt to take action against 2,25,000 companies for not filing financial statements.

The government has recently notified to take legal action against more than 2,25,000 companies for not filing their requisite financial statements for 2015-16 and 2016-17. As per Section 248 of the Companies Act, the Ministry of Corporate Affairs (MCA) holds a right to strike off the name or penalize companies for not complying with Companies Act provisions.

Till now the ministry has already struck off more than 2.5 lakh companies for not filling their financial statements and annual returns for a continuous period of more than two years.

-To commence its business within one year of incorporation.

-In non-receipt of subscription from subscribers within 180 days of the date of incorporation and non-filing of a declaration for the same to the department.

-For not carrying onto any business or operation for a period of two immediately preceding financial years and has failed to submit an application for obtaining the status of a dormant company under section 455 etc.

-For not filling their requisite financial statements and other records as per law provisions.

While, till now some of these shell companies have been acknowledged while some more is yet to be discovered and to be checked by a task force established, headed by the Finance Secretary Mr. Hasmukh Adhia and MCA Secretary Mr. Injeti Shrinivas.

On identification of such shell companies, the ex-directors/authorized signatories would be restricted from operating bank accounts and other operational accounts in name of these companies. They cannot withdraw any amount from these accounts until specified to be under special provisions or until the status of their company is restored back to legal company provisions as per the Companies Act.

Also Read : Things you can’t miss out in GST to notice: one anti-profiteering second the constant GST rate change policy…