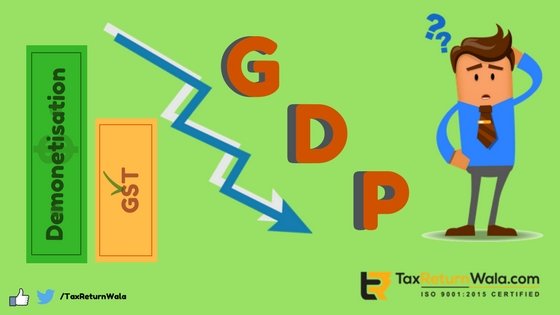 Why GST and Demonetization Alone are Not Responsible For Slow GDP Growth.

Though there are multiple villains to blame, the most immediate reason is demonetization of November 2016 and the implementation of the Goods and Services Tax in July this year. GDP Growth has been slowing for five quarters now, and the government’s target of over 7% for 2017-18 suddenly looks untenable.

Among the few positives that kept GDP growth going in April-June was government expenditure. Then there was also the gold buying, often a sign of distrust in financial investments. Expenditure under “valuables” in the April-June quarter grew by 3.4% as against 1.2-1.3% range seen in all the four preceding quarters. While gold is often seen as a secure asset, the buying may also be partly explained as a pre-Goods and Services Tax purchase.

While Goods and Services Tax pushed up gold buying, it pushed down manufacturing. Manufacturing companies sent out their old stocks to market, holding back on production. It brought down manufacturing sector growth from 5.3% in January-March to 1.2% in April-June.

And the impact of the 80 basis points lower weighted-contribution from manufacturing is perfectly balanced by a similar higher contribution from trade, transport and communication. It’s incorrect to say that growth was pulled down by Goods and Services Tax or Demonetization. Quarter-on-quarter, it is getting evident that there is a slowdown, largely due to stagnation of investment. Investment to GDP ratio has been declining.

The way to accelerate is only one: intense focus of the government on implementation of announced reforms like Demonetization and Goods and Services Tax which we believe will trigger the next round of durable gains for the economy.