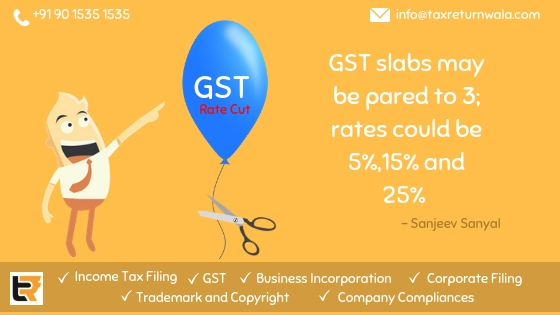 The Economic Advisor to the Finance Ministry, Mr. Sanjeev Sanyal has recently come up with a new update in the working laws of GST. He has recently ensured the business sector to see some bigger amendments in the GST tax slab rates in the coming days.

As per his scripted address to the nation, in the coming day’s government is planning to bring down all the current GST slabs to only three in number. Under new slabs, the goods would be placed under 5%, 15% (merging 12% and 18% being present slabs) and the highest to be only the 25% (taking in the highest 28% goods) slab rates. The following update came from the interactive session held at Bharat Chamber of Commerce where Mr. Sanyal in a line of his observations said ‘in long-term, the GST rates might squeeze as more and more simplification will be done in GST’.

In the previous GST Council meeting, the proposal to reduce GST slab rates was too aired by many council members. Also, the Bihar Deputy Chief minister leading the highest level ministry panel on GST also said that GST slabs may reduce down in the coming future as the present slab rates being 0%,5%,12%, 18% and 28% burdens the present taxpayer with multiple slabs based distribution of goods and bifurcated invoicing.

In an interview to Bhasha, Modi also indicated the proposed change to be done under GST council recommendations to reduce these GST slab rates to only three in number, but being a major reform this would take time as the decision is related to state government revenues he further stated.

Addressing some clues of over the coming government policies Sanyal said ‘the inability of the legal system to enforce contracts needs to be enforced and this requires reforms. The administrative reforms as suggested for GST are on the government radar.’

He also said that there’s been a slowdown down in the economy with the new reforms but it is the beginning of recovery as the government is rapidly concerning towards undertaking many legal and administrative reforms for the society.