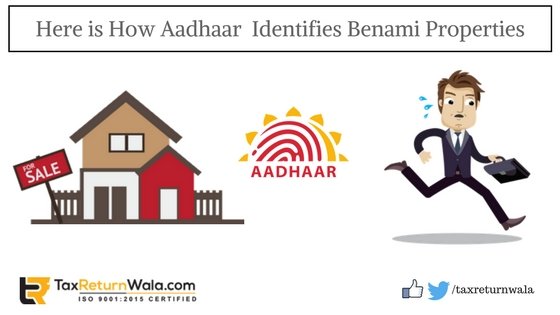 Post to Demonetization, PM Narendra Modi made several addresses to nation indicating his definite plans for rooting out black money from India. After cracking up huge cash holdings, the coming aim of government is to acquire details of investments kept in the economy as benami assets.

Using the known fork ‘the Aadhaar’, government will catch up details of all property holdings of every individual by mandating his/her linking of Aadhaar details with the property papers.

Here is more you need to know about Aadhaar and Benami properties.

This is because, In India a major part of black money is held in the form of benami properties (assets) which can be either in the form stock holding of gold/cash/house property or any other form which at present is not in course of government books.

In a round of 1st year anniversary of Demonetization, the Modi government descripted its future plans to not only implement the Benami Transaction (Prohibition) Act (Amended 2016) strictly but also to identify & seize such holdings with a unique identification number (Aadhaar) by linking it with every benami property (asset).

Earlier, tracing a benami property & finding its real owner was a herculean task for tax authorities. To speed up the information gathering process they had to come up with certain cash rewards for their secret informers to disseminate information of such holders. But the success rate of getting authentic information of transactions from them was gradually low.

The amended Act came to existence from November 1, 2016 in which major restrictions to bank deposits (considered as property after amendment) and holdings of immovable properties was affected to strict policies and linking of Aadhaar with all assets was mandated. The main advantage of this strategy was its feasibility in ‘locating the true legal owners of the property & all the previous deals done by them in fictitious names’.

Once the owner’s Aadhaar gets linked to invested property (being gold, deposits or other form properties), the tax authorities identifies and approaches the legal owner and declare the property as benami if the legal owner is unaware or denies of ownership.

Even if the legal owner claims that it is his property, he needs to show the source of income for buying such property.

Q.1 Will the strategy opted, be problematic for genuine taxpayer?

Yes, because the registration procedure for them will become more cumbersome and time-consuming.

Q.2 Will it be a harassing move to people who made a purchase of property in name of family members?

No, because there are certain special provisions to protect them also. The usual transactions of buying a property in name of kids, spouse, parents and joint names are already exempt in the Act while they have to show the income sources of purchasing such properties.