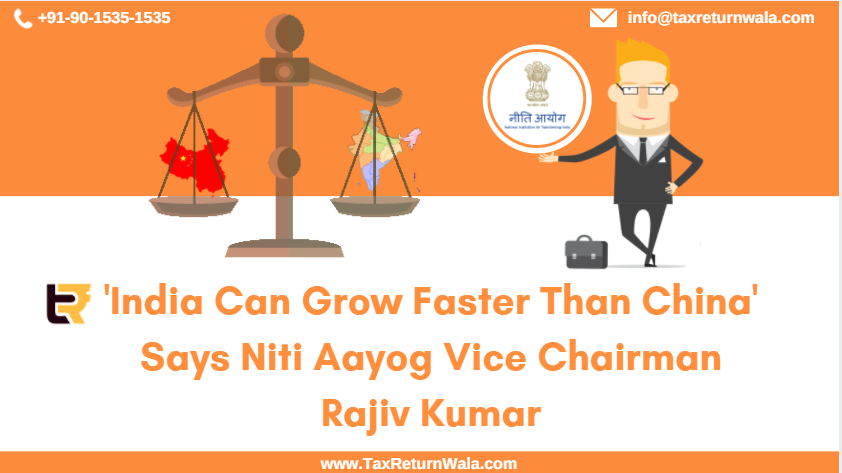 India can take over the baton of higher growth from China for the next three decades if ties between the two Asian giants remain buoyant and the Indian economic trajectory follows the Chinese one, NITI Aayog Vice-Chairman Rajiv Kumar said in one of his recent interview.

For the first time since the global economic crisis in 2008, “there are signs of synchronized economic recovery in major economies” like the US, Europe and Japan, he said at the third annual dialogue between the top planning bodies of the two countries.

Praising the present economic scenario he said “It is imperative that the two countries work together and help each other to grow further,” he added while addressing words between the NITI Aayog and Development Research Centre (DRC) of China.

“I think now perhaps hope all of us agree that given the circumstances globally and in Asia, maybe India can take over the baton of higher growth from China for the next 30 years,” he said.

China’s achievement of lifting over 600 million people out of poverty is “remarkable in human history”. Talking about Prime Minister Narendra Modi he said ” very emphatic” about India’s growth rates moving to double digits as higher growth alone can remove poverty in India as in China.

“Now India must follow suit. For that, we need to focus on and achieve a higher rate of growth of employment.The increase of over 14 percent in wages per year for the past few years in China is a sign that India can benefit by Chinese investments moving to India which will generate employment,” he added.

He also highlighted Modi’s plan to achieve double-digit growth by 2022.

In a series of appraisals for various contributions of the Modi Government he said ‘Indian government is trying to make the public sector more accountable, trying to ensure that states compete with each other and India to be able to achieve the double-digit growth so that we can achieve complete freedom from six evils of economy (i.e.poverty, squalor, corruption, terrorism, casteism and communalism.)

“We want to replace competitive populism with competitive good governance so that we can derive the democracy dividend for which we have had to pay a cost so far. If we succeed, we will ensure that India will achieve double-digit growth rates in a sustainable and inclusive manner,” he said.

“We in India are at the cusp of many new changes. We have to adopt completely different growth. Maybe we may not generate as many jobs as China did but India wants to work with China to fill the spaces it is vacating in industry,” he said.

As China moves ahead in technology and knowledge, it is opening up space for others in fields like light engineering and light manufacturing, he said.

“While you are vacating those spaces, India would do well to invite Chinese investment so that those spaces we can fill and generate employment, while at the same time taking all the innovative steps in India to ensure that it is not left behind in the fourth industrial revolution which is currently underway,” Kumar said.