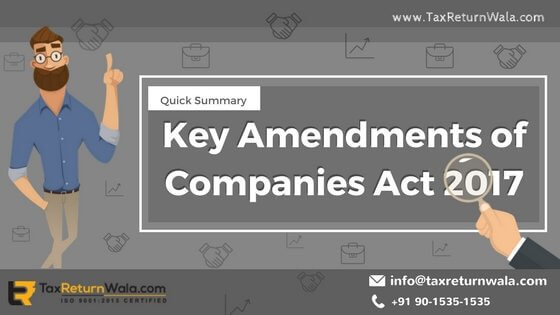 The Companies (Amendment) Bill, 2017 has received its acceptance from both statutory houses being Lok Sabha and Rajya Sabha on ‘‘27th July 2017 and  19th December 2017 respectively and has also received President’s assent on 3rd January 2018 .

The newly amended Companies Act 2017 is aimed at easing business compliances by facilitating ease of doing business, promoting growth and development of small business structures, harmonising accounting standards, improving regulatory and provisional procedures in Securities and Exchange Board of India Act, 1992, Reserve Bank of India Act, 1934 and the regulations made thereunder, rectifying present inconsistencies and omissions in the Act (2013).

Here is a list of Key Amendments Made by Regulatory Authorities in the Companies Act 2017 (Amended) :-

For Ease of Doing Business :

Note: Director found in any disqualification under section 164(2) (being in default of filing financial statements, payment of interest etc) can vacate office in all other companies other than the company which is in default.

Also Read : Why are ‘Companies’ A Better Form of Business ?