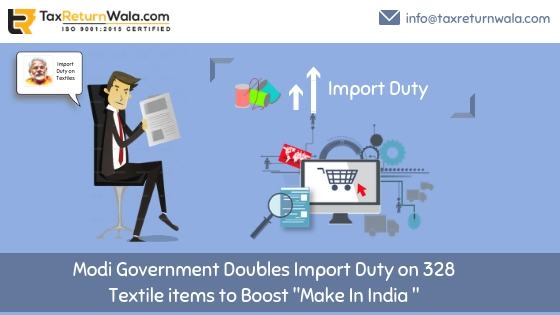 Leaning on to the textile manufacturing sector for generation of employment opportunities, the government has recently called for a change in their taxation policy. With a new update, the government has notified for levy of double import duty on all import houses in the country keeping 20% on tariff lines of 328 textile products for making a counterbalance of imports with the domestic production.

While the step has been taken considering a planned action for creating employment opportunities, it is also expected that this increase in duties would provide a much competitive environment to local manufacturers against the presently imported cheaper products in the market.

As per a statistical research, it has been said that this step can employ as much as 10.5 Crore people in the country as an addition of duties to imports would lower the price value of domestic products against foreign imported products and would increase its demand generating a good source of employment for future production.

To bring the thought to economic advantage, this update was tabled by the Minister of State for Finance Pon Radhakrishnan in Lok Sabha, scripting the notification as (‘to increase custom duty on 328 enlisted tariff lines of textile products from the existing rate to 20% …Under Section 159 of the Customs Act 1962’. )

Earlier to this, in the month of July, the thought was left for consideration in the assembly, where the government only doubled import duty over more than 50 textile products including suits, carpets, and jackets etc. Seeking this as advantageous to domestic manufacturing and a forward step for generation of employment spaces, the government made several researches of their past projects and took this as a conclusive step for the country.

The duties as stated have been doubled on most of the textile products. It will not only boost domestic manufacturing but will also allow duty-free access of underdeveloped countries like Bangladesh to Indian markets. Before this, the manmade fibre in home country was 20 to 30% more costly than the one imported from China.