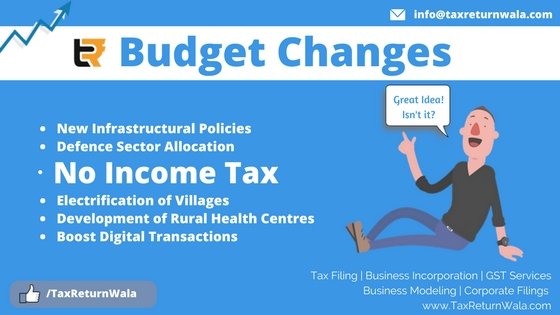 No Income Tax ! A Thrilling Thought To Be Taken Before Any Budget Announcement

Since last few years, the absolute proportion of income tax collection out of total GDP has been only 2%, out of which mostly the salary based middle-class people pay their taxes honestly. Concluding to this situation, Finance Minister Arun Jaitley in the last year budget (2017-18) said ‘While the poor don’t pay taxes, the rich find innovative ways to avoid paying it, thus India has been largely a non tax complying society.’ If the government by any measure take some bold steps for tax termination, it would affect only 2% of the population like observed in GST and demonetization implementation and can build up more remunerative sources to the government.

Since the success drive of demonetization, a relative idea propagated to the PM Cabinet team seeking it to be a new Arthkranti,  that is to brush off personal income tax from the economy in the coming budget 2018.

However, there are very fewer chances that Finance Minister would go for such a radical move.

The idea of removal of personal income tax bought several arguments in favour and opposition, as one that India was not able to expand its tax base in last few years and other being that abolition of income tax will not lead to much revenue loss, rather it will boost up spending power of people with more availability of cash leading to more consumer demand and savings. The other arguments stated, that government with the change would be able to focus more on other tax strategies like GST for easing business compliances and easy tracing the black money.

Not only tax compliances but also it will also indirectly result in the creation of more jobs by bringing down wages and encouraging new companies to hire more people. Likely to say , that with the proposed move the banking sector will also get uplifted as with no black money , people will keep most of their accumulated currencies in banks finding no ways of hiding it , as suggestions recited by Anil Bokil’s ArthKranti , in such situation the government can introduce a nominal banking transaction tax in system for effective revenue .

Maintenance of deductions and exemption records would be phased out, which will further remove the tax administration and comply cost of the economy.

Abolition of income tax can yet be an advancing move for the coming generation, but still as per our opinion realizing to such decision is a myth. It can be clearly anticipated that the coming budget 2018 will surely bring more reliving changes and better implementation policies which will bring more feasibility to tax compliances.

1 thought on “No Income Tax ! A Thrilling Thought To Be Taken Before Any Budget Announcement”