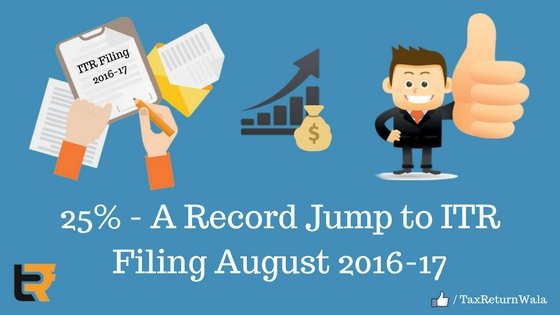 New Delhi:  While the centre and authorities felt a setback of GDP with Demonetization, the recent fiscal records updated the benefit of the move with an effective rise of taxpayers in economy. Submitting a new growth figure of 41% in advance tax and 25% in number of Income Tax Returns, Central Board of Direct Taxes (CBDT) triggered to appraise demonetization for bringing growth results to government.

An official statement by CBDT notified the growth as ‘Those under bracket of income more than 5 Lakh are stated to file their return online and ITR filing may include both individuals and business registered as companies and partnerships. The number of individual filers rose to 25.3% in April-August of 17-18 to 27.9 million.’

Comparing last year values, there was a 9.9% increase in ITR filings of FY16 with 2.26 cr taxpayers, while this year 2.82 cr returns were received just up to August 5, 2017 while actual submissions corresponded to 2.79 cr till date. Implied with small businesses, centre vocated that compliance is getting improved now, as bulk of new tax payers are grouped in 5 Lakh and below category, which contributed to a total of 69% to the increase.

Quoting the improved situation of ITR filing Amit Maheshwari of Ashok Maheshwary & Associates LLP said that ‘Present Increase in number of small taxpayers means that this majority was contributing almost nothing to tax revenue earlier, so government should pursue collection from other taxpayers in space left behind in the trail with demonetised currency’ .

In support to government move of demonetisation, the income tax department subsequently launched Operation Clean Money to curb down unaccounted money transactions with banks and to strictly apprehend individuals and corporates for delaying their previous tax dues.

Also, implementing for a new deadline for FY17, taxpayers are now being benefitted to pay their tax dues till 31st December with a penalty of Rs 5,000 subjecting that late ITR filing people cannot carry forward their losses except in cases of house property.