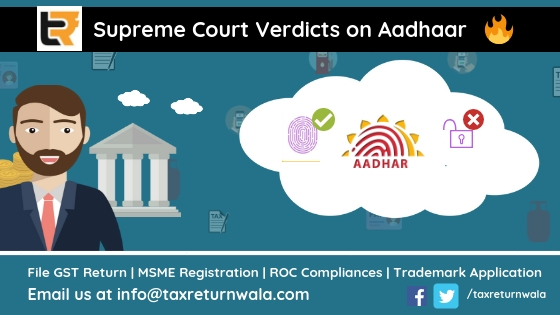 The Supreme Court on Wednesday, 26th September 2018 declared Aadhar as constitutionally valid but struck down some of its provisions including its linking with bank accounts, mobile phone connections and school admissions or appearing for NEET, UGC and CBSE exams. However, it will still be mandatory to link Aadhar card with PAN card and for filing Income-Tax returns.

The court took due notice of the unique feature of Aadhar which involves collecting biometric data at the time of issuance of Aadhaar. A person who has been issued Aadhaar once cannot get more than one Aadhar card as biometric details collected second time for obtaining the second Aadhaar by the same individual would match with biometric data in Aadhar database and he can’t be issued a second Aadhaar card. Once the biometric information is stored and on that basis Aadhar card is issued, it remains in the system with the Authority. The biometric accuracy of Aadhaar is 99.76%, claimed the authority.

The court also took note of the fact that analysis of Form 61/60 data using PAN-Aadhar linkage shows that a large number of PAN holders do not quote their PAN in the prescribed transactions in order to prevent linking of the transactions to the PAN. This came out when Central Government matched the Aadhaar number and person name reported in Form 61 with the Aadhaar and name of the entity available in the ITD PAN database. Considering such facts, the court decided that linking of PAN with Aadhar will significantly enhance legitimate collection of country’s revenue.

Therefore, this judgment has strengthened the Government’s fight against black money by ensuring that people do not get rid off from tax net by simply not quoting their PAN in reportable transactions. It has also upheld the constitutional validity of Section 139AA of the Income-Tax Act, 1961 mandating linking of PAN and Aadhaar.

Also Read : Government may soon come out with a comprehensive gold policy .