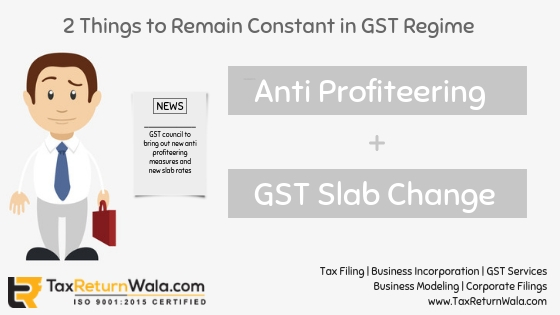 Things you can’t miss out in GST to notice: one anti-profiteering second the constant GST rate change policy…

Since rolling of GST in India, criticism always aired the walls of the GST Council. It has always been criticized on grounds of impractical tax slabs, improper management system, lack of visibility and delays in refund procedures. While government is being criticized for bringing out such an unplanned rule of action,  made several technical and legal changes in the GST base rules for making it more feasible for the business sector.

Even after lapsing off a complete year of GST, only two things have been in the continuous radar of government kept on priority for consideration in their tax base planning, one is anti-profiteering and the other is constantly making changes to their GST slab rates. While anti-profiteering ensures transfer of tax reduction benefits to be passed on to customers, the government has also been on side of making the benefit to the ultimate consumer by constantly rationalizing the GST rates. In the sum of plans revealed by the government, their key focus lies on improving government revenue by keeping the highest slab rate for only demerit and sin goods which at present includes mostly electronic items.

Also, in a recent update, the GST council has indicated their future plan of merging 12% and 18% slab rate to a single 14-15% tax slab. This would club all the highly rated products, consumer durables, and electronics which have a direct impact on the working requirements of household and businesses. It is also expected with the merging of two slabs the anti-profiteering measure would become a constant for two years or may even extend for more. Anti-profiteering has always been on the tough side for businesses, it’s been often criticized for not passing the GST reduction benefits to taxpayers.

For keeping a regular check over the working rates and the movement of the benefit of input tax credit on tax reduction to the final consumer, the National Anti Profiteering Authority (NAA) was constituted under section 171 of Central Goods and Service Tax Act, 2017. While the stated constitution period for this regulatory body was determined for 2 years, but as always due to continuous changes in coming policy decisions of council and authority, on running slab rates it may be possible that this body might last for longer than 2 years.

The NAA as a legalized body in concern for anti-profiteering measures, which was approved on June 18, just after the 2 weeks of the beginning of GST era.

Also Read : Cash Transactions : Know Which and Why to Avoid