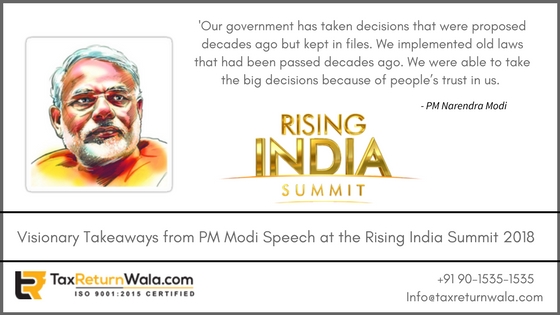 To the nation, each word spoken by Prime Minister Shri Narendra Modi is a sign of some fore-coming change in the country’s system. Each time he addresses the nation with the most ethical one man radio show ‘ Mann ki Baat’, he provides a sign of change to public detailing about the serious issues prevailing in the society and the possibilities of improvement.  On his path, addressing responsibility and attention towards welfare and development of the eastern region of country, he lifted on some most discussed issues and presented his view points on turning polices of government at the Rising India Summit held at New Delhi on 16th March 2018.

Beginning to his pre planned view points, PM called for some common problems which were plaguing India and the need of greater public participation for success of coming government initiatives. Below is a summarised text of all motivational viewpoints quoted by PM Narendra Modi, at the Rising India Summit.

PM Modi concluded the conference at Rising India Summit, opting in for a favourable response from people for coming projects of government in future and quoting in – ‘every institution in the country needs to work together to build a nation, for nation welfare, and to pursue the journey of development’.