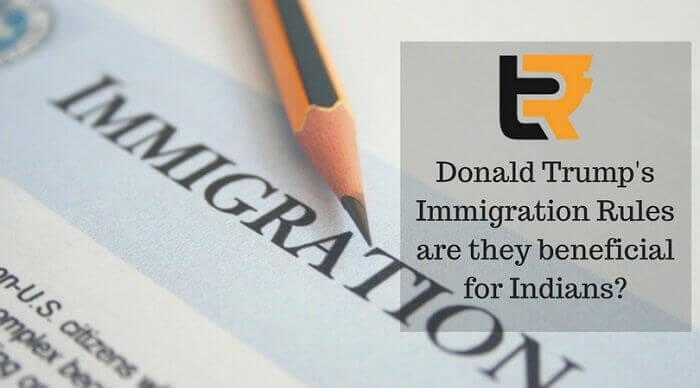 Donald Trump’s Immigration Rules; are they beneficial for Indians??

The prevailing immigration rules welcomes vast majority of immigrants. It sponsors immediate family members of citizens and legal permanent citizens— spouses, minor children and parents for visas that are not subject to any caps.

Mr. Donald Trump, President of USA recently declared the revision in Immigration rules and cited merit-based immigration rules of countries like Canada, Australia, in which immigrants are awarded points according to their educational and employment background, language proficiency and financial means, among other considerations. The highest scorers get priority for admission.

The merit-based immigration rules have the potential to benefit Indians;

The vision of Mr. Trump assimilates the economic boost to American workers. According to him the current immigration rules is straining the very public resources that poorest US citizens rely upon, it also deploys countless dollars on struggling families of immigrants and millions of jobs from citizens. Also the existing immigration rules has created an oversupply of low-skilled workers, who in turn drive down job opportunities and wages for Americans with a high school diploma or less.

Indian’s who occupy low skills jobs will not be able to comply with Immigration Rules and such restrictive immigration policy could hamper their ability to hire desirable candidates for jobs.

Critics of the merit-based system say that there is no guarantee that reducing the number of those immigrants or substituting people with better education and skills would increase either wages or employment opportunity.