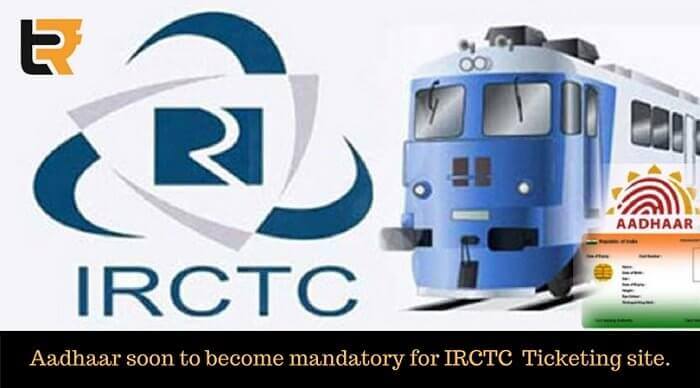 Indian Railways is each day working on strengthening its ticketing system and it could soon introduce a system in which Aadhaar will become mandatory for booking rail tickets online. Though railways has taken several measures to put a check on touts, still the touts corner a bulk of tickets and sell those at much higher prices and this is becoming a serious problem for the Railways and certainly the passengers too.

The sources from the Railway ministry said in recent past that Aadhaar will be required for one-time registration at the IRCTC ticketing site. The step is aimed at eliminating touts from registering with fake identities and booking tickets in bulk there by fighting the evil of black marketing.

A senior Railway Ministry official also added that the Railways is preparing a software for this purpose so as to end fraudulent bookings and prevent cases of impersonation. It will bring in transparency in rail ticket reservations making the verification process easy and convenient. It will also prevent misuse of such a facility as ticket collectors can instantly verify the claims of passengers. The motto behind introducing this system is to ensure that only bona-fide passengers with legitimate tickets travel in trains and thereby preventing huge revenue losses to Indian Railways.

The move towards Aadhaar-based online ticketing system has come at such a time when the government is making Aadhaar mandatory for different services to stop fictitious transactions and for establishing the identity proof of the genuine persons, who avail government benefits such as subsidized food grains, gas cylinders and other such subsidies.

Which will further be explored along with the Aadhaar based access control system.