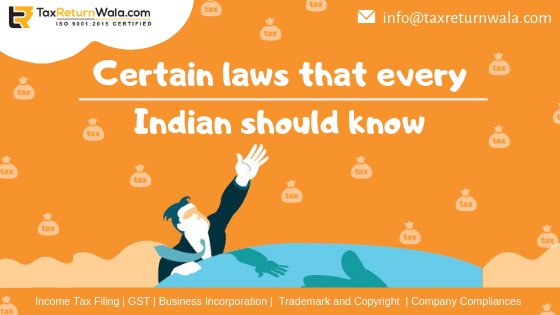 Certain laws that every Indian should know

Laws in our society helps in following ethical norms for best behavior. Ethical standards are different for different people but laws are developed based on ethics and acts which when decided as morally and ethically wrong requires decency. For example, workplace harassment is denied in Harassment of women at Workplace (Prevention, Prohibition & Redressal) Act, 2013. Laws help to sustain orderliness and provide guidelines to promote justice and equality for all…

Our Indian constitution provides numerous laws and regulations to protect the interest of individuals. However, it places equality for applicability of such laws but lacks in promoting awareness for all such rights and benefits it holds for people.

Here in this article, we have mentioned what exceptional benefits & restrictions certain laws places which most of us didn’t know about.

Though the list seems unending, we tried to list some important laws and rights which people should be aware of.

For legal advisory and assistance on business compliances, talk to our compliance expert.