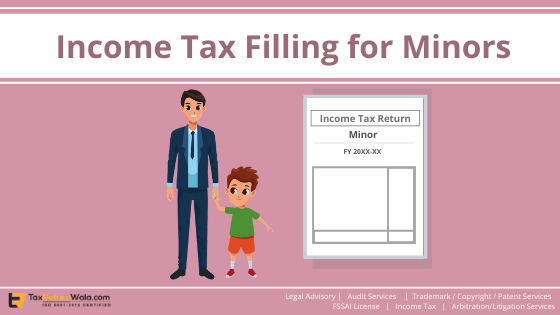 There is no age prescribed for the individuals to file their income tax return, each and every person can proceed with the filing of their return on the income tax portal.

As mandated the minor with income can report to the authority by filing the Income Tax Return in prescribed form through the following modes:

Each individual who wants to file their income tax return have to have some basic documents with them which are as under:

Generally, diversion of income is a crime as per the Indian statute. Moreover, as per the Income Tax Act, 1961 (“The Act”), clubbing of income means addition or inclusion of other person’s income to assessee total income thus, implies that such assessee is liable to pay tax on such income.

The income of a disabled minor child which falls under the category of Section 80U of the Act, such shall only be reported in the income of such minor’s child.

In case, the income earned by minor is manual nature work, such income shall only be reported in his/her return.

The income earned by the child from activity involving the application of his/her skill, talent specialized knowledge and experience, such income shall only be reported in his/her income.

The benefit of clubbing is for the assessee in whose income the amount of minor child income which gets clubbed into the income of the assessee.

But in case of income of minor child from Fixed deposits should be clubbed in the hands of parents whose income is higher without clubbing income of a child.

Such a parent gets a deduction of Rs. 1500/- (Refer Section 10(23)) without taking cognizance that the income earned through manual work, or through personal skill or under disability covered under section 80U.

Thus, there are varied circumstances under which the income of a child is clubbed in the income of parent which higher income is subject to exceptions and liability to pay tax is thus, transferred.