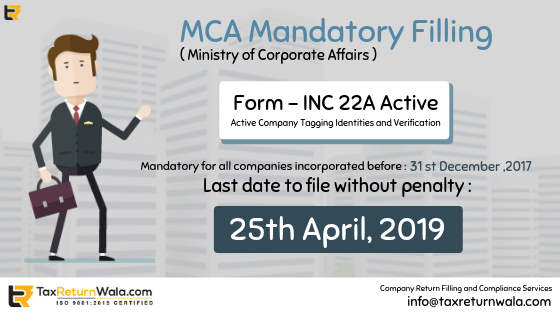 To pull up the reporting standards, the Ministry of Corporate Affairs has put forward a compliance notification for all companies incorporated before 31st December 2017 to electronically file their company particulars to the department before 25th April 2019.

Adding a strict dialog to the notification, MCA stated that the companies will now have to mandatorily file an e-form- INC 22A ACTIVE (Active Company Tagging Identities and Verification) to submit particulars of their business and its composition to the ministry officials.

The notification has been made with reference to the Company (Incorporation) Amendment Rules,2019 (being effective from 25th February 2019).

The companies have been called out to file the e-form INC-22A Active, once they

– have completed their filling of Financial Statements and Annual Returns.

– have checked DINs of all directors of the company to be in ‘Approved status’ and have not been de-activated or disqualified for non-filing of DIR-3 KYC u/s 164(2).

(Note: If in any case the Company Annual filing has not been done due to some internal disputes and is already reported to ROC, Companies can still e-file the form INC-22A Active ).

What is required to e-file Form INC-22A Active?

Filling of form INC 22A by companies requires detailed submission of :

Is there any exemption?

The reporting requirement of e-form 22A Active has been withdrawn by MCA from certain companies if they are found listed under :

What could be the consequences for non-filling or delayed filling of Form INC 22A Active?

MCA has defined compulsion for all companies satisfying the above criteria to file e-form INC 22A Active before 25th April 2019 else :

– The status of the company in MCA statutory data shall change to ‘Active-Non Compliant ‘.

– The company shall then be restricted from filling :

– Company shall have to face direct action from ROC under Section 12(9) of the Companies Act,2013.

Let your queries reach our support team at info@taxreturnwala.com