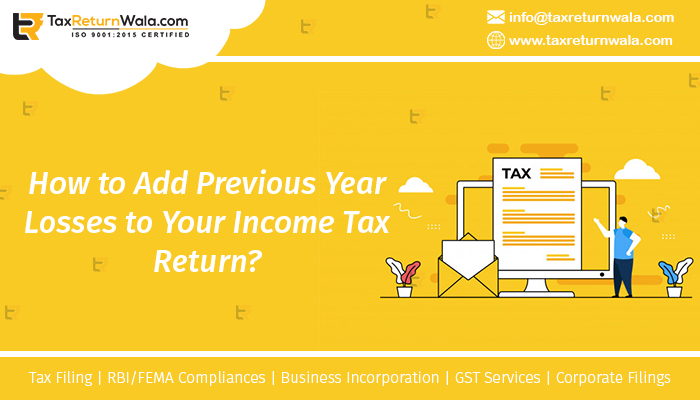 How to Add Previous Year Losses to Your Income Tax Return?

Tax planning is all about saving money for future contingencies. However, it takes a lot of research on your finance part for investments to grow on different kinds of wealth.

Most people are inclined towards building upon assets like investments in debentures, equities, real estate, gold, etc. Also at the time of sale, the investors expect such investments to yield an economic return.

However, things might not go well according to plan and you might incur a loss for the same. Now, incurring a loss is as normal as gaining from a capital asset.

Some losses are short-lived while others may have long-term repercussions. The catch here is to understand how to accumulate these losses to your next Income Tax Return.

When Does Capital Loss Arise?

It is a well-established fact that in case you sell a capital asset, you will have a capital gain. On the other hand, when any losses are incurred on the capital asset, then it is termed as capital losses.

Also, the nature of your loss will depend upon the time for which you have held the asset. Such losses can be short-term or long-term depending upon the stipulated “Timeframe.”

What Happens When The Asset Is Held For 2 Years?

In such a scenario, the losses incurred will be long-term and will get calculated after indexing the cost of purchase. Now the question of whether the capital losses can be carried forward and set off against income of future years?

The answer to this question is Yes. Suppose a taxpayer has incurred a capital loss, then the income tax act will allow the taxpayer to set off or carry forward his or her losses. This helps not only for the proper tax planning but also helps in making positive investments.

For example- If a taxpayer received a capital gain of Rs 20 lakhs from the sale of a residential property and loss of Rs 10 lakh from another property, he or she can set off such loss of            Rs 10 lakhs against the income, thereby enabling him or her to set off the capital losses entirely which in turn will help in reducing the taxable income, also increasing efficiency in tax planning.

In case during a financial year, if the taxpayer doesn’t have enough income against the losses, then he or she is entitled to carry forward the losses to future years for setting off against the income of the upcoming years.

Coming back to the above-mentioned example, had the capital gain from the other source been Rs 4 lakhs, the taxpayer would have been able to adjust the year under consideration and would carry forward the unadjusted capital losses of Rs 6 lakhs to future years.

Setting off Losses in the Income Tax Returns

It is compulsory to file your income tax return on or before the due date of the income tax fill up for enabling the carry forward of the capital losses.

There exists a Schedule CYLA in the income tax return which gets auto-updated with details of your capital losses from the Schedule CG and provides you with the income of the year after setting off capital and their associated losses.

Similarly, in case you had losses in previous years and you had filed the return of taxes on or before date, you can simply set off such losses with eligible capital gains in the Schedule-BFLA, available after the current year adjustments.

By following the above-mentioned points you are in a good position to get hold of your tax planning along with adjusting your previous capital losses in the current income tax return.