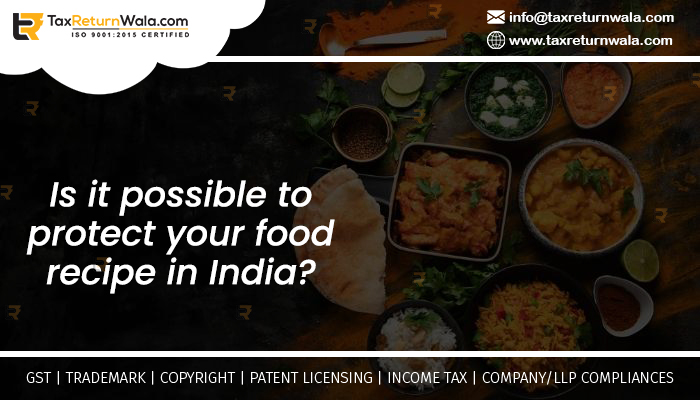 Is it possible to protect your food recipe in India?

Intellectual Property Rights provide the owner to have their own identity and uniqueness in the market from the others whether in terms of trademark, patent, copyright, design, or combination of anything.

Now the questions arise for those homemakers or chefs who made and invent new food recipes by the existing raw material in a new way, form, shape, color, or any combination and how they protect it from others.

In Patent Act, of 1970 food recipes can be protected if and only if they satisfy the following conditions for it to be granted Patent protections. Patent Amendment Act, 2005 of the Indian Patent Act 1970 has introduced product patent protection for food, pharma, and chemical inventions.

1) Novelty –The recipe must have an element of new and novel methods, not just an extension of the older method.

2) Non-obviousness –The invention must be inventive not just mixing raw materials which result in the obvious recipe.

3) Industrial application –The invention must be industrially applicable i.e. it must prove useful to mankind or animal or industrial level.

The procedure to obtain patent protection in India for food recipes are as follows:

5. Grant of patent: Once the examiner is satisfied with the counter reply to the objections stated by the applicant, then the final Patent is granted and an official Patent certificate is given for that invention.

Examples of a Patent on Food Recipe

Therefore, while there are no ‘sure-shot’ legal safeguards for food recipes, they are often protected as trade secrets. If the chefs choose to disclose these secrets, they ensure that they are protected by confidentiality agreements and non-disclosure contracts.

Touch base with us at info@taxreturnwala.com