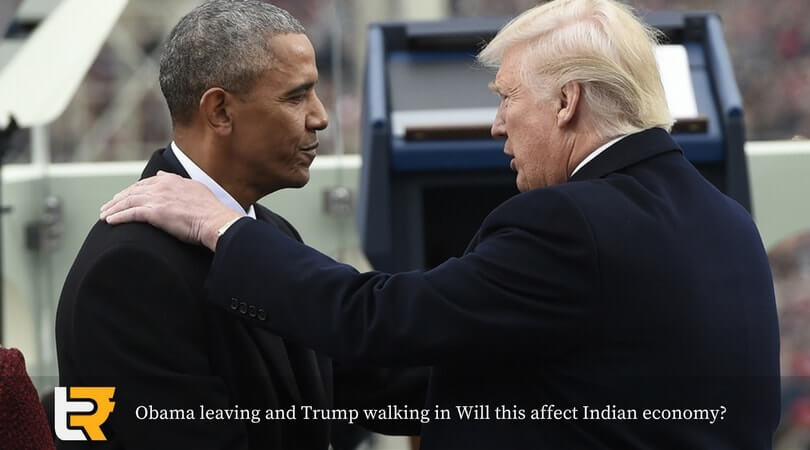 Obama leaving and Trump walking in Will this affect Indian economy?

The most awaited and outrageous US elections have resulted the wining of Republican candidate “Donald Trump” giving a momentary leaving handshake to “Barrack Obama” and a clean defeat to “Hillary Clinton“.

Since announcement of election dates Trump was part of among the top shortlisted personalities and discussions which influenced the relations of US economy with the whole world. In-spite of his popularity in real estate business, he also came to be known for his zero political background which he took benefit of, among one of his rallies by saying “I am not one of those”.

Having a bi-faced image and now being a controller of the most vibrant economy, Trump has not yet clarified about the changes he required in US-trade policies and future with the other world economies but one thing is sure, he aims to get the global investments made by USA citizens back to the USA.

What do his expressions reveal about a futuristic US economy?

Laying stress on trade policies, he is expected to renegotiate new trade policies and also, he promised a reduction in corporate tax from 35% to 15% which will invite more new ventures to built and rush to US. Other than trade sector he also gave a short description of shifting towards becoming a manufacturing hub giving a healthy competition to China and to bring manufacturing jobs back to US.

What he has to say about Japan and Pakistan?

While talking about other economies he gave a term “Cash Cows” to China and Pakistan for taking so much Cash aids from US for several years and using it for trade surplus adjustments and Islamic terrors in one way or the other. Also, loosing up relations with Pakistan he said “The dangerous country of all and India to keep a check on them” highlighting the relations of India and Pakistan as worse rivals.

What India estimates to gain and loose from Trump?

In terms of limiting the US trade routes and backing up US jobs, it will affect major exports of India, as total exports to US account for big share in Indian exports. Also under regime of Trump, India may see a downward fall in tech workers and immigrants with H-1B visa thought.

Favorably, Trump said about Indian PM “I will look forward to work with Prime Minister Narendra Modi who has been very energetic in reforming India’s bureaucracy. Great man, I applaud him for doing so” giving a certain estimation of good future relations of US-India. Also he quoted to work as a good friend in white house for India. Moreover, Trump left with giving some positive comments for Indian economy and Hindus and also invited Indian Entrepreneurs to US.

While, after addressing the White house chair, Trump in his latest telephonic conversation held with PM Narendra Modi, expressed his belief to work with India in some of their future ventures giving a good sign of its null effect on trade between both countries. Later they did a healthy conversation discussing about trade, defense policies and strengthening the partnership between US and India in certain other broad areas.

In short, Trump is a man of unpredictable character, and it is very difficult to judge him as a Indo-Us economy booster or a predator.