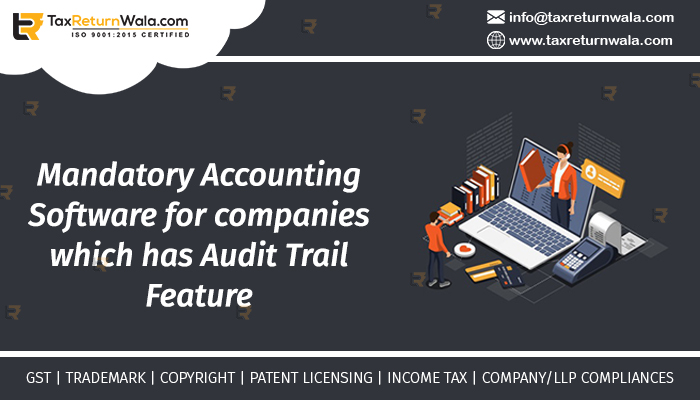 Mandatory Accounting Software for companies which has Audit Trail Feature

The history is evident of how business organizations in the past not only in India but also overseas, used to cook the books with the intent to show lower profits to evade higher amounts of taxes. The well-known cases in India were the Satyam scam, Harshad Mehta scam, etc. while globally were the Enron Corporation and Dotcom scam. All these scams are proofs of irresponsible financial systems where the culprits made misuse accounting software.

For a robust economy to be built, stronger financial systems have to be incorporated in order to bring transparency to their operations. This transparency only comes by audit, scrutiny, and internal control of the accounting mechanism.

The main ideology behind this amendment:

With this intention to bring more and more transparency and accountability in the operations of companies of India, the Ministry of Corporate Affairs remitted a new notification to all the corporations to compulsorily use such accounting software’s which have the feature to record an audit trail of every single deal and transaction put through after April 1, 2022 (initially 01 April 2021 had been announced as the date to implement this change but immediately after this a new order came and the same was delayed by 1 complete year). This amendment is made to avoid such economic mishaps and thus bring a surge in tax revenue for the government.

Such financial efficiency in the books of accounts of the corporations will help the shareholders and investors of such companies to take accurate decisions while making transactions with them as auditor should state in the Audit Report “the audit trail feature has not been tampered with and the audit trail has been preserved by the company“.

The companies are using the software as Enterprise resource management (ERPs) to manage all their accounting data. Most companies using ERPs do not have audit trails. These are usually small and medium-scale ones. The big corporations that have huge turnovers might have ERP software but may not have the latest features. This recent amendment will try to solve all these loopholes in the system and revamp them as well.

Another update of the same amendment says that all the companies have a mandate to create and edit log of each change made in the books of the accounts with proper mentioning of dates. Further, the notification envisages that companies are prohibited to disable the audit trail. As a result, the organizations must ensure that the audit trail is not put off.

The official note by the Ministry of Company Affairs

Provided that for the financial year commencing on or after the 1st day of April 2022, every company which uses accounting software for maintaining its books of account, shall use only such accounting software which has a feature of recording audit trail of every transaction, creating an edit log of each change made in books of account along with the date when such changes were made and ensuring that the audit trail cannot be disabled,” the Union Ministry of Corporate Affairs said in the notification.

The new rules are part of the amendments made to the Companies (Accounts) Rules. According to the notification, “in rule 8, in sub-rule (5), after clause (x), the following clauses shall be inserted namely: -“(xi) the details of the application made or any proceeding pending under the Insolvency and Bankruptcy Code, 2016 (31 of 2016) during the year along with their status as at the end of the financial year.

The reactions of the people at large

Any sudden change which is made in the policies of the government affects the operations of the auditors, corporations, and associated stakeholders hugely. This change is welcomed by some organizations; while some have shown their displeasure viewing it as a compliance burden.

Think Compliance Think Us
Share your compliance concerns with us at info@taxreturnwala.com