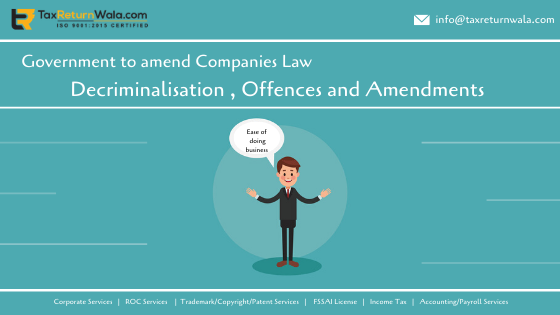 In 2019, the Companies law was amended in July to tighten the corporate social responsibility (“CSR”) norms and to assure that the Act preserves strict action on non-compliant entities.

In the same year in November, Government appointed a high-level panel to further suggest changes and reforms for ease of doing business for Companies in India.

The Union Cabinet has now made about 72 new changes in the Companies Act, 2013. Amending about existing 65 sections, Finance Minister Nirmala Sitharaman proposed for the decriminalization of offenses to be made in provisions of the act, through the Companies (Second Amendment) Ordinance, 2019.

The proposed amendments assured for re-categorization of 23 offenses out of 66 compoundable offenses and bring simplification in the adjudication procedures. Government claiming the amendments to be easy building for businesses, stated the for the omission of seven offenses and readjustment of 11 offenses, to be dealt only with punishment or monetary penalties removing provisions of imprisonment and other harsh implications for accepted defaults.

Some alternative penalty options have also been proposed to be placed under the quantum of penalties only.

The amendments also proposed for the company’s obligation spending on Corporate Social Responsibility (“CSR”) for up to Rs 50 lakh per annum to not mandatorily appoint any CSR committee.

It will be referred through the amendments to provide a credit of spending made for CSR obligations above 2% in any particular year to be carried forward for next year.

Last year government stated for the necessity of amendments required in the Act for decriminalizing half of the existing compoundable offenses limiting them to monetary penalties or and fines.

The proposed amendments will lead to further improve the ease of doing business in the country for startups.

For law-abiding companies, the bill de-clogs the criminal justice system in the country and further builds ease of operations for corporates.

FM added “that the government ideals for proposing such amendments is to remove the imprisonment angle and reduced punishment provisions for law-abiding abiding companies. The amendments prompt for analyzing companies only for genuine commercial failures.”

The cabinet proposed for the Company (Second Amendment) Ordinance 2019 on February 21, which was inclusive of amendments required for ease of doing business for corporate including proposals for omission of penalties, offenses, compounding of offenses, beneficial ownership, authority approvals, registration charges, easing commencement of business, issue of shares at discount and for re-categorization of offenses.