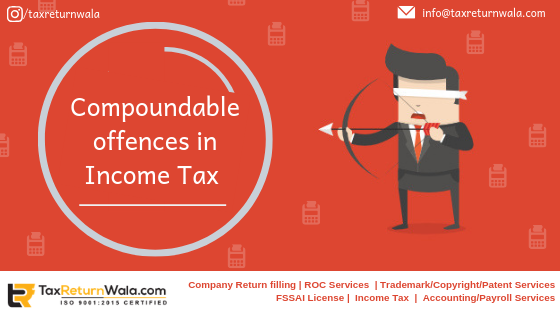 This post will guide you all about identified legal penalties and the quantum of reliefs provided by the tax department for complying with provisions related to the compoundable offenses under the Income-tax law.

The Sections 275A to 280 of the Income-tax Act defines for all chargeable offenses against a defaulting assessee by the Income-tax department. These can either be prosecuted against an assessee in the court of law or within the judicial powers of the assessing officer or competent authorities (“CA”) depending on the case situation.

For any of the above defaults made, the tax department prescribes for three modes of the charge against the taxpayer:

Compoundable offenses include all those offenses which are discretionary at the level of parties under dispute. For redressal or application of penalties no permission of the court is required and are appealed & conciliated within the final decision of the designated authorities. In short, it is a way of adjustment of compliance forbidding through a legal settlement.

The Income-tax Act provides relief of prosecution from the following offenses:

Provisions applicable for Compounding as per New Guidelines 2019

File an appropriate response to the department to avoid legal prosecution by emailing us at info@taxreturnwala.com

Also Read: Taxability of Gifts to NRIs from Resident Indians