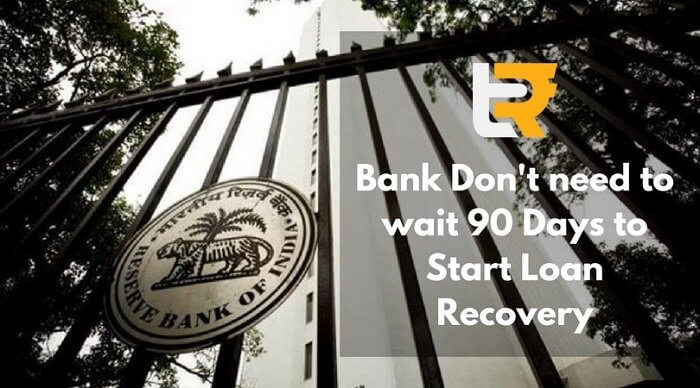 Now the Banks can initiate loan recovery proceedings without waiting for an account to be formally classified as non-performing asset, as the latest amendments to banking rules allow for faster resolution of their bad debt problem, a senior government official said in recent past.

Under Reserve Bank of India rules, a loan becomes non-performing if the interest or instalment of principal remains overdue for more than 90 days. “Under the proposed ordinance, we have clarified that the default will be considered as per bankruptcy laws, which means if the payment is missed it turns into a default the next day,” said the official.
This provision was inserted into the Banking Regulation Act through May first week’s ordinance so that banks can plan their remedial action in advance.

If there is a case where lenders are of the opinion that they need to look at other measures, including change of management, to recover their arrears from a defaulting company, they can now go ahead without waiting for the 90-day period to end before initiating the resolution process.

“The ordinance clearly states that, and there is no ambiguity,” said IBBI chairperson MS Sahoo. It is up to the banks to take a call whether it is the right time to really invoke bankruptcy or other options, he added.

Some experts, however, sought more clarity:

Senior Partner of a well renowned Law Firm said, “The Reserve Bank should clarify what should be the provisioning requirement for companies going under bankruptcy in the first day of default, in the event a bank decides to file it the same day”.

A senior finance ministry official said the RBI will identify cases of bad debt to be taken up for resolution under the new NPA ordinance in consultation with the Indian Banks’ Association.