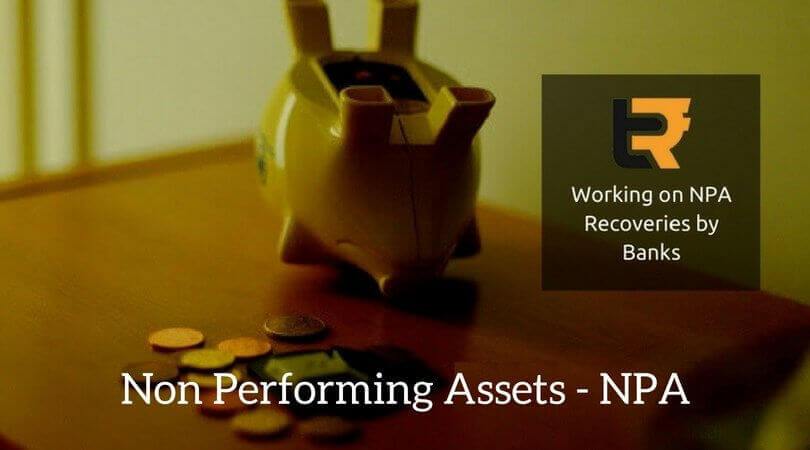 Working on NPA Recoveries by Banks

NPA (Non-performing Asset), includes a leased asset which becomes non-­ performing when it ceases to generate income for the bank. NPA is a loan or an advance where;

Banks should, classify an account as NPA only if the interest due and charged during any quarter is not serviced fully within 90 days from the end of the quarter.

Under the meaning of definition there are so many areas of defaulters and thus the NPA recovery is most exercising part.

To aid the procedure of NPA recoveries Debts Recovery Tribunal was established to receive claim applications from Banks and Financial Institutions against their defaulting borrowers.

The Debts Recovery Tribunal now deal with two different Acts, namely the Recovery of Debts Due to Banks and Financial Institutions Act as well as the Securitisation and Reconstruction of Financial Assets and Enforcement of Security Interests Act.

To resolve problem of NPA recoveries concept of An asset management company (AMC) is formed. AMC take the note of defaulters/NPA from Banks, financial institutions and pool funds into securities that match declared financial objectives. Asset management companies provide investors with more diversification and investing options than they would have by themselves.

The full form of SARFAESI Act as we know is Securitisation and Reconstruction of Financial Assets and Enforcement of Security Interest Act, 2002. Banks utilize this act as an effective tool for NPA recovery. It is possible where non-performing assets are backed by securities charged to the Bank by way of hypothecation or mortgage or assignment.

SARFAESI is effective only for secured loans where bank can enforce the underlying security eg hypothecation, pledge and mortgages. In such cases, court intervention is not necessary, unless the security is invalid or fraudulent. However, if the asset in question is an unsecured asset, the bank would have to move the court to file civil case against the defaulters.