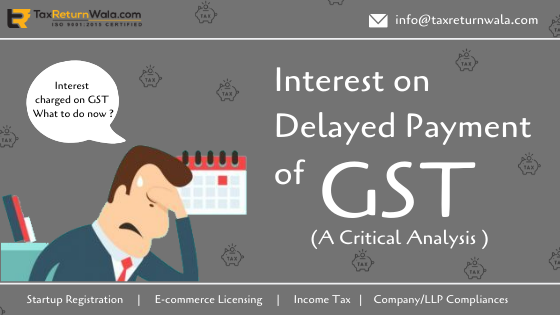 Interest on delayed payment of GST – A Critical Analysis

Delay in payment of Goods and Service Tax (GST) creates a charge of penalties on the taxpayer. For each day of default, the GST law other than levy of the penalty amount for non-filling,  prescribes for a penal interest, if the taxpayer fails to file or submit the tax amount within the prescribed due date.

While there are a lot of misconceptions and confusion about the levy of penal interest in GST, this post will help you get it in a more convenient way.

#1 From whom the penal interest will be charged?

The Section 50 of the Central Goods & Services Tax Act, 2017 (CGST Act) prescribes for levy of a penal interest on the amount of tax left unpaid with the taxpayer or if he claims excess input credit or reduces excess output liability as the case may be, after the stated due date by the department.

The context of the section implies for ‘’ Every person registered within the provisions of the act or rules made therein, being liable to pay tax but fails to pay whole or a part of the required amount within the prescribed period to additionally pay penal interest on the amount at such a rate not exceeding 18% or as may be notified by the government timely ‘’.

For non-payment of GST, the Section provides for an interest penalty of 18% (subject to change) on the required GST amount which the taxpayer was liable to pay to the government before the return filing due date.

The Section also provides for a penal interest to be charged on claiming of Input Tax Credit (ITC) by the taxpayer, if an amount more than the appropriate amount as computed by authorities has been availed by him as ITC at  24% (subject to change). ,

#2 How the penal interest in GST on delayed payment of tax be charged?

#3 On which amount the penal interest will be charged?

Specified in the Union Budget 2019, In case of delay in payment of GST, the taxpayer will only be required to pay interest on the net cash liability out of total tax to be paid i.e. interest on liability after adjustment of credit of ITC and ledger credits.

For instance, against the tax liability of Rs 18,000 which was to be paid for the month of November but paid on 20th January and  the taxpayer was yet to receive ITC of Rs 5,000 and he holds credits in a ledger of Rs 10,000, so the interest amount to be payable will be calculated :

#4 How the amount of interest in GST be calculated?

While the GST law provisions remain silent in defining the manner for calculation of penal interest, but it was expressed to be paid from the date on which it was due till the day it was paid to the government. For no expression of penal interest calculation in law, it shall have to be calculated using the method of simple interest.

#5 When the amount of interest in GST be paid?

Not specified in Section 50, the due date for payment of liability adjusted with penal interest as per rule 61(3) shall be paid when furnishing the return for the period for which tax and penal interest left unpaid. It shall have to be paid by debiting the electronic cash or credit ledger.

Section 50 of the CGST Act, was placed to abide by taxpayers to pay their taxes on normal terms and avoid penalties from the department. Putting the interest obligation on the taxpayer was a challenging move of government in terms of acceptance and implementation but the authorities considered it an appropriate decision in the interest of justice.

Tired of looking for GST due dates?

Now you don’t need to.

Avoid delays and file GST returns without any hassle with taxreturnwala.com

Also Read: How Small Businesses can benefit from E-Invoicing under GST