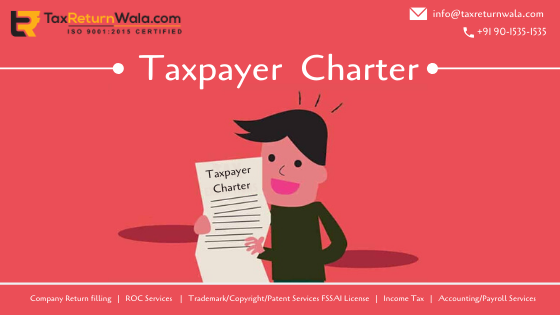 Introduction to Taxpayers Charter (Section 119A) in Budget 2020

In the Union Budget 2020, the Finance Minister proposed several changes in the Income Tax Rules. The Finance Minister introduced a new policy for the taxpayer for the adoption of the charter by the Central Board of Direct Taxes (CBDT) and issued directions for its early implementation.

Union Finance Minister said in the Budget speech “that the proposed taxpayer charter will aim to boost trust between citizens & tax authorities and will improve efficiency in the tax administration as well.

The below post will give you a quick view of the necessity of a taxpayer charter and how it will affect the working of the tax administration.

The rationale behind Taxpayer Charter

Giving only a glimpse of the reform, the Finance Minister described the taxpayer charter to be a special document enumerating the taxpayer’s rights in the Income-tax act. It will establish a firm relation of the taxpayer with the tax authorities.

The objective behind issuing such a charter document was to safeguard taxpayers from an extreme level of harassment faced by them from the tax authorities and empowered officials. Finance Minister also admitted about the incidences, where tax administrators in spite of being told to not engage with any taxpayer in a face to face mode concerning any assessment or tax matter, approached taxpayers for dealing with them personally and treated them as wealth creators.

To provide a respected space to honest taxpayers for their contribution towards nation-building, the government came up with the provision of taxpayer charter.

“The charter, is yet to be incorporated in the Income-tax rules and its details will soon be notified to the taxpayers,”  Finance Minister said.

“The Board shall adopt and declare a Taxpayer’s Charter and issue such orders, instructions, directions or guidelines to other income-tax authorities as it may deem fit for the administration of such Charter.”

The proposal to issue directions for forming the taxpayer charter is still under consideration and if the proposal is accepted it will be affected from 1st April 2020.

It was a necessity to form obligations for the tax authorities to provide prompt response to taxpayer compliances. For instance, it was an obligation on the taxpayer to file and pay his Income-tax return before the due date, but “What is the absolute time frame for tax authorities for its processing, the grant of refund, assessment, appeal, etc?”.

The taxpayer charter will assure certain responsibilities on the taxpayer authorities to create an atmosphere of trust with their taxpayers.

Other Income Tax Amendments in Budget, 2020

Other than placing rules for taxpayer charter, the Finance Bill, 2020 also proposed such as: