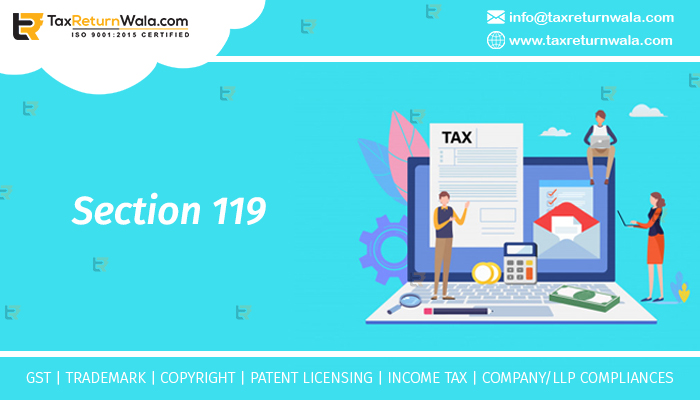 An Overview on Section 119 of Income Tax Act

An economy of a nation runs smoothly due to the adequate flow of revenues by the government. One of the sources of revenue for the government is the Revenue from the taxation of the Public incomes. This is also known as Direct Taxation as this tax is implicated directly on the disposable income of the person. Income tax is one type of direct tax. It provides for levying, administering, collecting, and recovering income tax for the Indian government. It was enacted in 1961.

The Income Tax Act contains a total of 23 chapters and 298 sections. The various heads for which you have to pay income tax include Salary, Income from house property, Capital gains, Profit and gains from business or profession, and Income from other sources. The Constitution of India laid down Article 265 which explicitly states that: no tax other shall be levied or collected except by the authority of law. These laws have been confined under the Income Tax Act, 1961. The act consists of a good number of sections where each section explains how income tax can be charged, claimed, refunded, or carried forward.

One of the most peculiar sections of the Income Tax Act, 1961 that has been placed with the fundamental aim of making the taxation process smooth, transparent, and without any hassle is Section 119 of IT Act, 1961.

The IT Act revolves around the timeliness of the filing of the return by the taxpayers. It has laid specific time limits within which the taxpayer should pay tax. The people do make different claims in their return of the incomes such as refunds, exemptions, deductions, carryforward of previous year’s losses, and so on. There are probabilities that the taxpayers delay in timely filing of the returns of the Income Tax. In such circumstances, doubts may arise whether all those rights related to refund, exemptions, etc. can be claimed or no?

Section 119 comes into the picture, now! It is your rescuer and savior. The Income Tax Act, 1961 has authorized the Central Board Of Direct Taxes (CBDT) to accept the claims of refund, exemption, or whatever the case may be, of the taxpayers, even if they file the returns post due date. However, the reasons for being late should be genuine, out of the control of the taxpayer.

Notification dated 9-5-2015 specifies the monetary limits based on which various levels of income tax authorities have the power to deal with those applications of the claims.

The below figure mentions the monetary limits of the claim made and the associated IT authority empowered to deal with it.

To receive those claims, the period is within the next 6 years from the end of the Assessment Year.

The Condonation application for refund or claim shall be admitted only on satisfying the below-stated conditions: