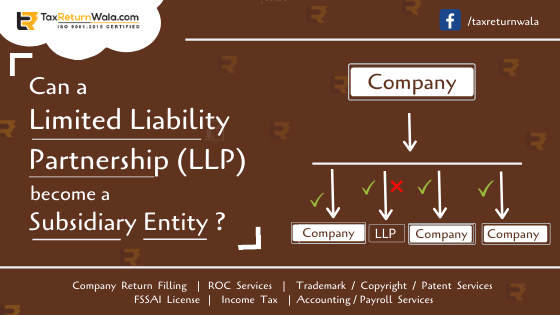 Can an LLP become a subsidiary of a company?

Limited Liability Partnership (“LLP”)  is one of the most prevalent forms of business entity in India, especially for licensed professionals like Chartered Accountants (‘CAs’), Company Secretaries (“CS”)Doctors, and Lawyers, etc. The biggest advantage of forming an LLP is that it ensures rigid control over management, power, and releases only limited exposure to the liability of partners. It envisages the formation of a new entity with no minimum requirement of capital along with following other features:

For the corporate sector, to hold a company as a subsidiary, it requires several compliance costs and the additional burden of disclosure reports to be prepared timely. Individual compliances for the subsidiary company have to be fulfilled with the ROC like it is being submitted for the parent company. Though taking into consideration, LLPs due to their foregoing benefits are being considered to be opted for forming subsidiary companies under the Companies Act. But the matter of fact is that ‘’ Can an LLP legally become a Subsidiary company under the Companies Act, 2013? ‘’.

To further elaborate, it is essential to know “Which entity can become a Subsidiary Company under the Companies Act, 2013?”

What is a Subsidiary Company?

In order to satisfy the eligibility of LLP to become a subsidiary company of any company registered under the Companies Act, 2013 the above 2 conditions are to be matched with the LLP rules.

Test 1: The holding company should control the corpus of the Board of Directors (BOD) of the subsidiary company.

The terms of the LLP Act, 2008 define Partners, and the Designated Partners to own a partnership. While Partners in accordance with Act means

Persons are eligible to become partners in an LLP as per the LLP Agreement which should be working for the LLP and not for other partners.

When compared to the company’s provisions, the directors have to hold meetings, prepare minutes, take decisions and are required to fulfill numerous responsibilities with ROC.

Thus, an LLP does not qualify for the Structure of the Board of Directors as required to become a Subsidiary company and it fails the test.

Test 2: The holding company should hold half of the voting right in the subsidiary company on its own or with one or more other subsidiaries.

Voting in a company as per the Companies Act means voting by members of the company through postal ballot, electronic means or any other mode as finding suitable. While in an LLP there is no such mechanism to conduct voting. Voting in LLP is defined by the LLP Agreement and bound to change with amendments in the LLP Agreement.

Thus, the clause of the LLP Agreements decides for the Voting power in the LLP, so it fails the second test also.

Choose the right business structure for your startup business!

LLP or Company or Partnership!

We are there to help you get started.