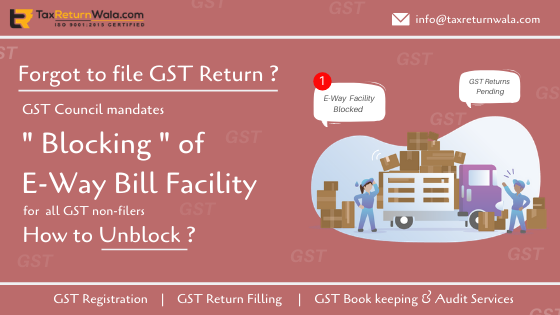 The persons registered in GST will now have to be more cautious in their GST compliances, as the Government of India (GOI) has brought an alarming policy for the negligence in compliance of the GST Act, Rules & Regulations. For all non-filers and those found evading taxes, an instant penal action would be taken by the GST Council by restricting their E-way bill generation facility. Taxpayers will no longer be able to generate their E-way bills for not-filing their GST for consecutive two months before the stipulated due date.

For all those taxpayers who have not filed their GST returns for 2 or more consecutive tax periods i.e., failed to file GSTR 3B for 2 or more months on the portal, from 2nd of December, 2019 onwards, they will not be able to generate there E-way bills until they file their pending GST returns with appropriate late fee and interest, as the case may be.

Persons whether registered under GST provisions or not are required to generate an E-Way bill, each time they transport goods worth more than Rs 50,000 in the course of their business. E-Way bill along with the invoice is to be carried during the movements of goods.

The E-Way Bill generation facility of the GST Council permits the taxpayers to apply for E-Way Bill online.

Based on past revenue collections, the department found the delay in filing of returns to be a major cause of the decline in tax revenue. Also, it was found that taxpayers were not only defaulting in their GST returns but also their E- waybill transactions were increasing, which were left unreported to the government for longer durations inappropriate places.

#3 What is Blocking of E way Bill Generation?

The GST portal provides the due date for GSTR 3B online filling. Taxpayers are required to file their GSTR 3B before the stated deadlines by the department, else they will be charged with a penalty fee

Now along with the penalty prescribed, non-filling of GSTR 3B for two consecutive months, will impact on disabling their facility to generate an E-way bill for such and all later transactions.

The provision for blocking of E-way bill generation has been placed under Rule 138E of the Central Goods and Service Tax (CGST) Rules, 2017.

No person including a consigner, consignee, e-commerce operator, transporter or any courier agency shall be allowed to use E-way bill facility on E-Way Bill Portal if :

The GST system will prepare a list of all non-filers failed in filing GSTR 3B and provide it to the E-way bill system to block their E-way bill generation. The taxpayer after logging in to the portal can look onto their status of the block.

For instance, for failure in filing GSTR 3B for January and February, the E-way generation facility for the taxpayer will be blocked from March.

For all GSTINs whose E-way bill facility gets blocked by the department, no E-way bill can be generated either by any counterparty purchasing or supplying or transacting with the taxpayer in default.

Note: E-way bills already generated or any other facility or updates made in the E-way bill system by the taxpayer before blocking of E-way bill facility would not be affected.

#5 What is the Unblocking of E-Way Bills Generation?

For manual removal of the block over the E-way bill generation:

Note: A transporter not registered under GST shall not have to face a block of E-way bill generation as he is not required to access GSTR 3B online filling facility.

#6 How it will affect the taxpayer?

The taxpayer for default in filing of returns would later be restricted from delivering goods without an e-way bill.

If attempted to deliver, the authorities can claim to hold the consignment seeking it as an attempt to evade tax. The taxpayer can be:

Avoid delay to your GSTR 3B online filling with Taxreturnwala.com!

Need more clarity on this?

Feel free to connect with us at info@taxreturnwala.com

Also Read: All about Writ Petition in India