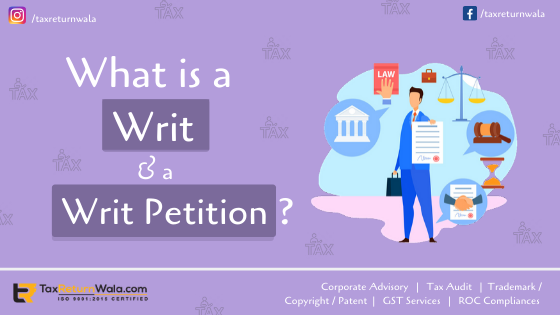 All about Writ Petition in India

Here the concept of Writ comes into the picture.

Writs in ancient times were used to depict a ‘Composed Direction of the King’ which was meant to notify the village tenants about the new directions for the land revenue. Writs in the Indian constitution were embraced as such from the English law, but with a slight difference that it can be accessible by any individual to exercise or claim his right against the order of the courts when served injustice or impugned, as the case may be.

A Writ is a written order issued by a court of higher authority. It is issued to a court of lower jurisdiction or to any individual if any violation is made with the fundamental rights of any citizen. As per the Indian Constitution, the Hon’ble Supreme Court holds the right to issue the writ under Article 32 and High Court under Article 226  against the decision of any court/individual lower according to their jurisdiction. Both the Article specifies the types of Writ, rules, and procedures to follow by the petitioner when any of the fundamental rights as specified is violated.

A Writ petition for a civil or criminal nature depending on the situation can be filed by an Individual/aggrieved party to a higher level of court against the order/decision of the lower court.

#2 Why a Writ petition is required?

The writ petition is generally filed in contravention of rights or injustice is served to any individual/aggrieved. It is a remedial measure provided by the constitution against the authority regulating the law and order in the country for the following reasons:

#3 Types of Writs in India

There are about five types of Writs, which one can file against the decisions of the High Court or the Supreme Court.

A petition for personal liberty or release from detention can be filed by an Individual through a petition of Habeas Corpus which means ‘to have control of body’. On receipt of the petition against the order of the lower court or the individual under which the person is or being detained, the court can issue a direction of release.

For instance, a writ petition of Habeas Corpus for release of any person can be made if he is to be placed before the magistrate within 24 hours or if he is arrested for no reason or the reason for his arrest is unjustifiable.

A petition to issue a command is a Writ of Mandamus. To issue a direction to a lower authority or to any Individual to restrain him from doing any activity, which can result in injustice to the general public or any specific group or individual. Such a petition can command any public authority or tribunal to perform an act which it is bound to perform.

For instance, It is the duty of the Judge of a Court to make a decision only on the basis of relevant facts presented, if he fails to do so, with the filling of a petition to a Superior Court, he can be made to do an action in a prescribed way.

A petition to issue a direction or command to any local authority or court to restrict it from acting beyond its jurisdictional powers. A writ of prohibition popularly known as ‘stay order’ is usually issued with the consequences for doing any act or taking action against its reserved powers.

For instance, a Writ of Prohibition can be filed with the Supreme Court to restrict any High Court from taking any decision which is not in the authority of the High Court (‘HC’).

For instance, A Writ of Certiorari can be filed by any aggrieved person against the decision of any District Court (DC) to any High Court through which the decision gets nulled.

A petition to restrict – a person to hold a position in any government office or involvement in any decision relating to the victim is a Writ of Quo Warranto. It is required to prevent the official to exercise any powers of the position as such which he is not entitled to hold and/or to nullify the decision taken by him if any. The writ shall be applicable to all public offices and not to private organizations.

For instance, to restrict a person’s incompetence to hold the position of a sub-inspector due to his incapability or low qualification, a Writ of Quo Warranto can be filed with the appropriate court of justice.

The concept of the Writ petition was brought in the Consitution of India to help a victim if he/she is deprived of any right or injustice made to him or to help him fight against any decision taken by the last legal authority. To file a Writ petition, the person has to either take the help of a legal advisor or hire a civil lawyer to file a petition on his behalf.

Did the court reject your Writ petition?

Talk to our legal expert online.

Also, Read Taxpayers to extra care for their tax payments with GST E-invoicing.