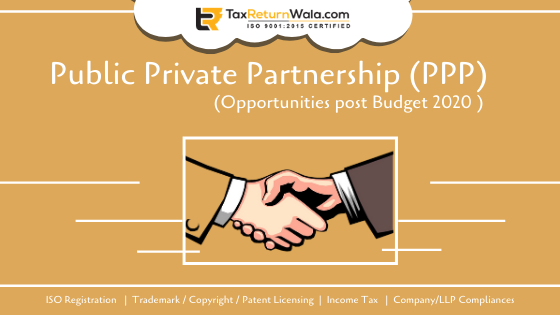 The Union Finance Minister, Nirmala Sitharaman in the Budget 2020 announced for some upcoming flagship initiatives of the government to be governed and managed in partnership with the private sector enterprises.

PPP (Public-Private Partnership) is an initiative by the Government of India which fuels and supports the collaborative effort to fulfill certain common goals of the society which are proposed to be achieving cost efficiency and in long term benefit the economy as a whole by entering into a partnership with private entities. It is made operational through a PPP Cell; the PPP model of government proposes to deliver the required public utilities and infrastructure facilities.

Emerging as a leading PPP market in the world, India has witnessed considerable growth in PPPs. In the last few years, extensive support to PPPs has been given by the government through project development funds, viability gap funding and provisions of long tenor funding, refinancing schemes

Setup of more warehouses with states in PPP Mode:
In the proposed budget, the Finance Minister announced to establish more warehouses in coordination with the Warehouse Development and Regulatory Authority (WDRA) by providing viability gap funding at the block/taluka level. This will be facilitated through the states in a PPP model.

Setup of Kisan Rail with Rail system in PPP Mode:

To ensure the on-time movement of perishables and delivery of efficient storage services to farm producers, Finance Minister proposed to build a Kisan Rail in PPP mode with the Indian rail system. Seamless national cold supply chains, refrigerated coaches in Express and freight trains shall be provided through such partnership.

To work for better implementation of the Ayushmaan Bharat Scheme by impaneling hospitals and then provide medical facilities, the Finance Minister proposed to allocate more funds through Viability Gap funding to PPPs. In the first place, the listed Aspirational districts of the country shall be taken into consideration and then the other areas which are lacking medical facilities shall be looked into. The move will altogether bring more employment opportunities within a limited time frame when initiated in PPP mode.

To fill in the gap of medical facilities and the requirement of qualified medical doctors, the Finance Minister proposed to attach district hospitals to medical colleges in a PPP model. Hospital agreeing to collaborate at concessional rates would be given viability gap funding for the working out with the initiative.

Set up Five new Smart Cities in collaboration with States in PPP Mode:

In order to maximize benefits for aspirational classes and those requiring facilities for the revitalization of manufacturing sectors, for matching with upcoming economic corridors and improvement in technology, Finance Minister proposed to build 5 new smart cities in collaboration with the States working on a PPP model.

Re-development of 4 new stations and Setting up 150 passenger trains in PPP Mode:

To measures infrastructure development required in the rail system, the Finance Minister proposed for the upcoming policy of the government for accepting PPP proposals for re-developing 5 major stations and bringing 150 passenger trains to operation.

Get expert advisory on GST