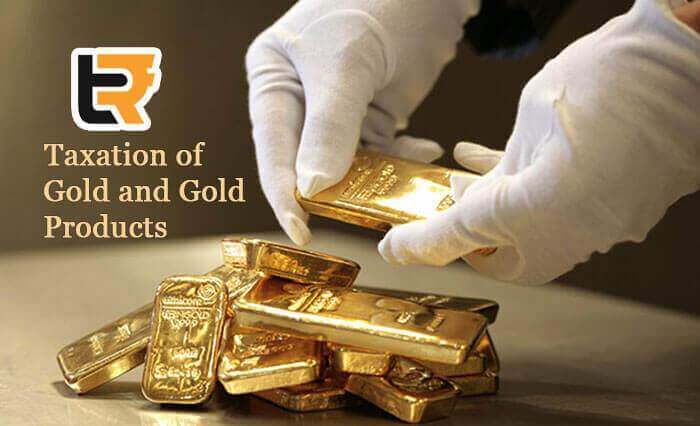 Taxation of Gold and Gold Products

The major asset in investment category is gold, currently a huge favorite of investors who fear almost all other assets, especially paper money. Taxation has also lent its glitter to this metal either by providing incentives or sometimes taxing it miserably. Finance Act 2016 proposed taxation of gold by a levy of 1 per cent excise duty on gold jewellery without input credit or 12.5% excise with input tax credit. Also gold dore bars saw rise in countervailing duty from 8% to 8.75%. Excise duty on refined gold bars has risen from 9% to 9.5%.

TAXATION OF GOLD UNDER DIRECT TAX:

TCS (Tax Collected at Source) : According to Section 206C Every person, being a seller, who receives any amount in cash as consideration for sale of bullion or jewellery shall, at the time of receipt of such amount in cash, collect from the buyer, a sum equal to one per cent of sale consideration as income-tax, if such consideration,

CAPITAL ASSET: defined under Section 2 of Income Tax Act 1961 includes gold ornaments as well which means either long term or short term capital gain arises on sale or purchase of ornaments resulting in taxation of gold.

SOVEREIGN GOLD BOND SCHEME 2015: The Government of India has introduced the Sovereign Gold Bond Scheme with the aim of reducing the demand for physical gold so as to reduce the outflow of foreign exchange on account of import of this precious metal. The Bond is a mode for substitution of physical gold and also provides security to the individual investor who invests in this metal for meeting their social obligation. Accordingly, with a view to provide parity in tax treatment between physical gold and Sovereign Bond, Finance Act 2016 amended Section 47 of the Income-tax Act, so as to provide that any redemption of Sovereign Gold Bond under the Scheme, by an individual shall not be treated as transfer and therefore shall be exempt from tax on capital gains. It also proposed to amend section 48 of the Income-tax Act, so as to provide indexation benefits to long terms capital gains arising on transfer of Sovereign Bonds and relief from taxation of gold to all assesses.

GOLD MONETIZATION SCHEME 2015: This scheme has been introduced by the Government of India in 2015. With a view to extend the same tax benefits to the scheme as were available to the Gold Deposit Scheme, 1999 the Finance Act 2016 amended Clause (14) of section 2, so as to exclude Deposit Certificates issued under Gold Monetization Scheme, 2015 notified by the Central Government, from the definition of capital asset and thereby to exempt it from capital gains. It also proposed to amend clause (15) of section 10 so as to provide relief in taxation of gold stating that the interest on Deposit Certificates issued under the Scheme, shall be exempt from tax.

SEIZURE NORMS IN CASE OF GOLD: In wake of demonetization Government clarified that gold jewellery and ornaments amounting to 500 gm per married lady, 250 gm per unmarried lady and 100 gm per male member of a family need not be seized in case of search being conducted. We can conclude that a lot of schemes have been started to avoid holding this metal in physical form and tax benefits have also been given but still in Indirect taxes we have seen taxation of gold which although in short run is destructive but will be rewarding in the long run.