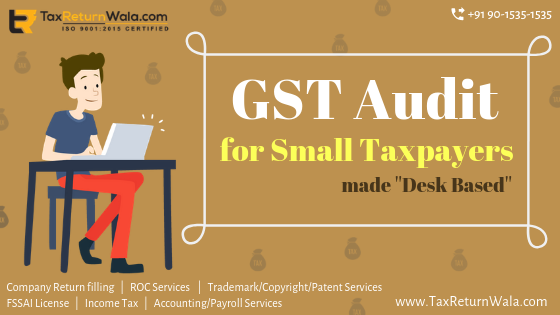 GST Audit for Small Assesses to be Desk-Based.

Moving as such with its GST Audit strategy for 2019-2020, the Directorate General in association with the DGARM proposed for the easy apportioning of audit data of taxpayers to the Audit commissionerate by dividing the list of taxpayers on the basis of their turnover. The divisions of the taxpayers will be made accordingly in the following subcategories :

Emphasizing on easy trade facilitation, intelligent enforcement and ensuring a non-intervening environment for audit compliance of the taxpayers, the department has decided to shift the present premise-based setup of conducting Audit to a desk-based GST Audit system for small GST taxpayers.

Small taxpayers will get benefit from the desk-based GST Audit procedures that are based on the returns filed by them during the year (but are not fully escaped from premised based audit). The taxpayer will be required to confirm to audit policies based on their turnover category. The turnover shall include the total taxable, nil rated, exempted and zero-rated supplies of goods and services but shall exclude non-GST supplies during the year.  The desk-based GST audit is expected to begin just after the taxpayer files their annual return.

DGARM (Directorate General of Analytics and Risk Management) has also revealed a PDF for categorization and selection of taxpayers for audit, based on some red flag risk parameters some of which include taxpayers whose turnover substantially increased after GST enactment, who delayed in providing documents or compliances , non filers who became filers, some sector-specific taxpayers like retail , telecommunication etc.

With the use of such parameters, a profile for the taxpayers for audit will be prepared for planning jurisdiction of central or state charge for desk-based or premise based GST audit of taxpayers. Like, it is specified that 90% of the taxpayers with turnover below 1.5 crores will be taken under Central administration for audit while the remaining half will be charged with the state authorities and half the taxpayers with above 1.5 crore turnover will be undertaken Central charge and remaining under State authorities for audit.

For those who are categorized as medium and large taxpayers, 40% of the total manpower shall be deployed for audit by the department. Also, the list with each audit commissionerate at present contains about 80% of the total taxpayers for audit under their jurisdiction, assuring adequate representation and audit of risky taxpayers in each category.

The list of audit assesses with their respective categories shall be shared with the jurisdictional officers through ANTARANG, Zone wise, the list there shall be further forwarded to the audit commissionerate of the zone for conducting the audit.

DGARM has also specified for a feedback improvement mechanism for accepting the timely changing in the risk parameters for selection of taxpayers for audit in the future.

Steps as the required time for the effective completion of audit will also be undertaken by the department as notified by Directorate General. While for the time being the teams have been instructed to minimize litigations while conducting GST Audit in case the taxpayers have made bonafide or minimal mistakes.

Is your business GST Compliant? Mistaken in filing your GST Annual return?

Get expert advisory on GST Annual return filling and Audit from TaxReturnWala.com