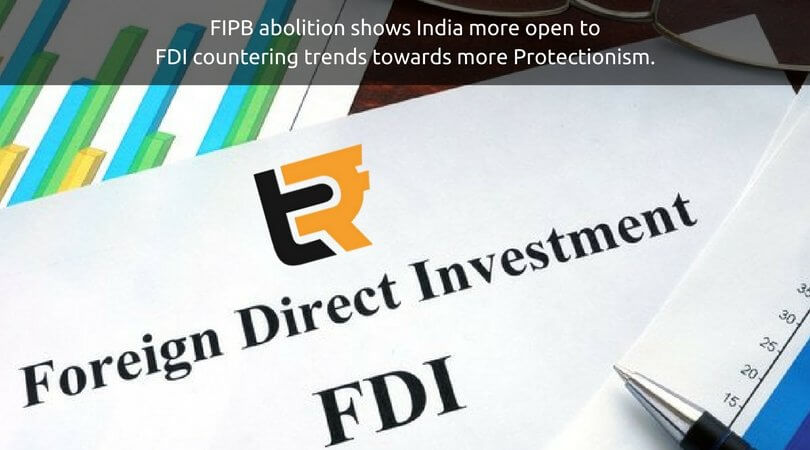 Finance Minister Arun Jaitley during his speech in session of Union Budget 2017 announced scrapping of Foreign Investment Promotion Board to ease the inflow of Foreign Direct Investment (FDI). He said that the Foreign Investment Promotion Board will be abolished and a new framework will be created. FIPB has successfully implemented e-filing and online processing of FDI applications. The country has now reached a stage where FIPB can be phased out. Therefore, the move has been done to ease the path for foreign companies to invest in the country.

FIPB is an inter-ministerial body that clears proposals envisaging foreign investment upto Rs.5000 crore. Currently, FIPB offers a single window clearance for applications on Foreign Direct Investment (FDI) in India that are under the approval route. The sectors falling under automatic route did not require any prior approval from the FIPB and are subject to only sectoral laws. Abolition of FIPB has been announced in order to encourage greater fund flows into the economy. This is an answer to all the countering moves which were trending against FDI. Also it is a counter to the risks of protectionism emerging throughout the nation.

Over the last three years, around 90% of FDI proposal have come through the automatic route because of the substantive measures taken by the Government in regard to Foreign Direct Investment policy. Consequently, it makes sense to do away with the FIPB. This is indeed a positive step to liberalize FDI policy framework and ease regulatory hurdles in attracting investments.

FDI – What next after abolition of FIPB?

The further liberalization of FDI is a big step especially in the listed space as foreign investments prefer to come in listed companies since there is an automatic exit possibility. could strengthen our country’s institutional quality and business environment. It can contribute to economic growth through job creation, capital mobilization and infrastructure development, while promoting productivity through technological and knowledge spillovers.

This will have a very positive impact for physical markets as prices won’t be manipulated by the speculators and farmers will get their due share. This will also increase volumes in physical markets.

The announcement by Jaitley should make FDI a smoother process through the approval route “especially benefiting single brand retail trading and multi-brand retail trading companies that are looking to invest in India”. This initiative also got an appreciation from global rating agency Moody’s, which termed it credit positive.

Analysts are of the view that the move has suggested relaxation of Foreign Direct Investment (FDI) norms as more proposals from multinational players and foreign financial investors could now be allowed through the automatic route – where prior government approval is not required even in sensitive sectors such as defence. The Government has been pushing to enhance the ease in doing business and a favourable patent regime to make India an attractive investment destination.

The finance minister said a road map for the post-FIPB scenario will be announced in the next few months. The Government will see how the policy will develop in the days to come.