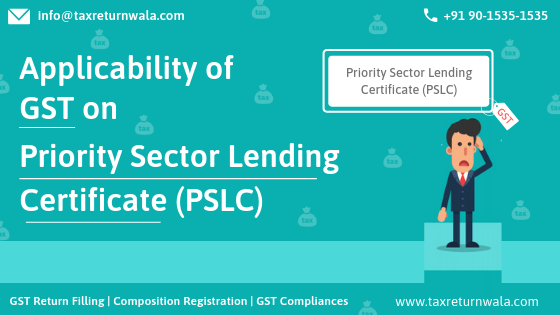 Only a few goods and services are left to be brought under the ambit of GST. The recent inclusion of the Priority Sector Lending Certificate (PSLC) in GST has been made by the Central Board of Indirect Taxes (“CBIC”)  for curbing inappropriate and unauthorized lending practices made by banks in the name of priority sector.

What is the Priority Sector Lending Certificate (PSLC)?

The basic thing to note about these certificates is that these are issued only between banks and the risk on account of credit made by over-performing banks, does not transfer with the issue of certificates to other banks.

The four specified types of PSLC include :

Applicability of GST on PSLC

Under Goods & Services Tax Act (“GST Act”), goods being every kind of movable property other than money and securities but including actionable claims, growing crops and things attached to the earth or being part of the land agreed to be severed before supply are subject to tax. Whereas Services has been stated as anything other than goods, money, and securities.

To understand the applicability of GST on PSLC, it is necessary to know whether PSLC is termed as securities or not – as securities do not count for taxable supplies.

Section 2 of the Central Goods & Services Act,  2017 (“CGST Act”), specifies for the definition of securities as :

– Rights or interest in Securities;

– Units or instruments issued by any collective investment scheme to investors interested in such schemes;

Thus, as per the above definition, PSLCs issued by banks does not transfer any risk, loan assets, interest or any right,  hence,  PSLC does not fall under the definition of securities. They have an intrinsic value of their own and are to be taxed at normal rates like other taxable goods under GST.

Note: Reserve bank of India (“RBI”) has also mentioned for the taxability and dealing of PSLCs as a permissible activity as per Section 6 of the Banking Regulation Act w.e.f. notification dated 4th Feb 2016.

Levy of GST on PSLC

For trading on e-Kuber portal and imposition of GST on Priority Sector lending certificate the following provisions have been laid forward by Ministry of Finance :

Connect with our GST Compliance expert online by emailing us at info@taxreturnwala.com