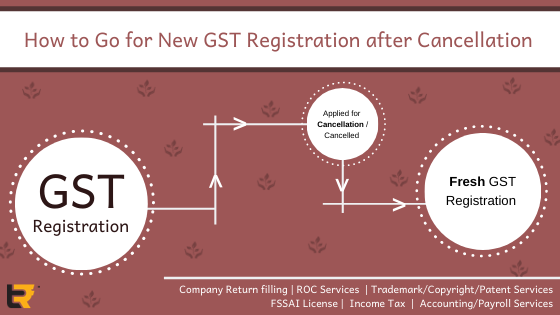 To consolidate the majority of indirect taxes and simplify tax imposition on goods and services in India, GST was wholeheartedly accepted. With constant changes and improvements in rules made every year in GST, the Government tried to leverage the way of ease of doing business in the country. In spite of tax benefits to marginal entrepreneurs, the GST council also took various contravening provisions in the law for violators. As specified in Section 29(2) of the Central Goods & Services Tax Act, 2017 (“CGST Act, 2017”), the government granted power to judicial GST officer to cancel the registration of any taxpayer in case of non-compliance of provisions.

This article explains to you well about the ways to apply for new GST Registration if your previous GST Registration has been canceled by the authority or by self under any specific reason notified to the government.

Section 29(2) of the CGST Act states for the provisions and powers available to the  concerned GST officer to cancel the registration in the following cases :

While The Act gives sufficient rights to the officer to cancel GST registration of any taxpayer, it also provisions an opportunity for the taxpayer to present his case before the GST officials. Earlier, in cases where the taxpayer opts to continue his business after the cancellation order of the officer, he could only go by applying to the officer through an application of the revocation of the cancellation of GST registration.

With the new rules, the proper officer has been issued powers to grant fresh registrations to the taxpayers whose GST registrations were canceled earlier and has applied for revocation. The tax officers have been issued caution guidelines to undertake thorough checks of the reasons of previous cancellations and unauthorized holding of fresh GST registrations along with old in the same state.

For allowing fresh registration the officer shall :

– Ensure whether the previous registration has been canceled of the taxpayer or not;

– If it is canceled earlier, to know the reason for cancellation. If canceled for the violation of any of the GST provisions or not.

– If canceled whether the taxpayer has paid any liability or applied for revocation or not.

The cause of Rejection of Fresh Registration

The notification also empowers the officer to ensure that the taxpayer has applied for revocation of GST registration cancellation and the conditions specified in Section 29(2) have been duly followed. If the default still continues in respect of any the provisions of the Act or Section 29 the officer may consider to cancel the fresh registration on the same grounds as well.