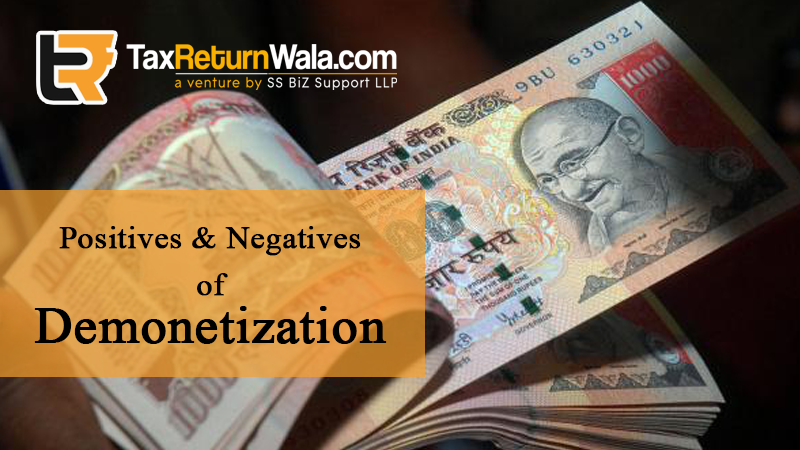 Positives and Negatives Of Demonetization

So why Demonetization the notes??

To curb financing of terrorism and various other unethical activities through fake currency notes.It also aims to stop from flourishing shadow Economy in India which deprives the Government of its Tax revenue and eventually leads to poor becoming the poorer and rich becoming the richer.It also aims to reduce the cash circulation in India as most of the illegal activities are done in cash and the positives of the historic move of the Government go on innumerably.

The immediate pain in terms of non-availability of required currency notes if not corrected soon, may reflect in reduction of output in agriculture, which may spillover to industry and services. Similarly, in the long run, implications could be uncertain. On one hand, confidence in efficient management of the economy should lead to a positive effect of demonetization while shock strike at unaccounted economy could lead to shrinkage in production, especially in the informal sector including micro, medium and small enterprises. The micro finance institutions, in the absence of high denomination notes, could suspend some of their operations for a short time.

At last I would like to conclude by saying that the long term impact of demonetization is yet to be seen but the move of the Government is definitely daring and sizable and our honorable Prime Minister deserves a lot of respect for his long term visionary goals.

For the hazards this move Is causing to people its just a matter of a short period of time its a planted tree which will bear fruits in the near future.

“Patience is bitter but its fruit is sweet”.