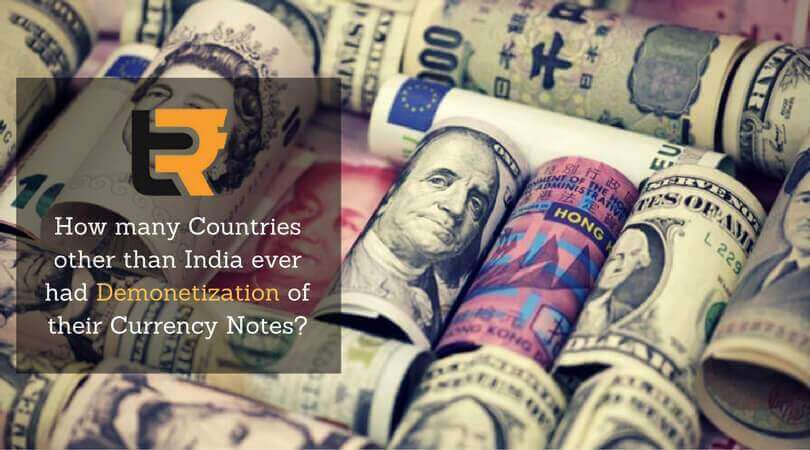 How many countries other than India ever had Demonetization of their currency notes?

Indians recently became familiar with the powerful word “Demonetization” and its effect on one and all. Demonetization means cease of any currency unit as a legal tender by a country. On 8 November 2016, the prime minister of India, Narendra Modi made this announcement at 8 PM via a live telecast addressing people of India.

As per the announcement, all the Rs500 and Rs1000 currency of Mahatma Gandhi series ceases to be legal money tender effective from 9 Nov, 2016.This news spread as fire throughout the country with people having different reactions.

India is not the only country announcing demonetization. In past, many other countries have also implemented it. Let’s take a look at which all countries had demonetization of their currency notes and its results.

Pakistan:  This step was taken in Pakistan on June 2015.Currency notes of 5 and 500 seized their effectiveness .People of Pakistan were given a time period of  18 months to exchange the old currency .All the old currencies have been declared null post 1 Dec 2016.Step was taken to eradicate the roots of black money from country.

Soviet Union:  Similar step was taken by Soviet Union in 1991.Mikhail Gorbachev Government banned the usage of 50 and 100 Ruble currency notes. Mikhail thought it to be a step to eradicate black money and to be in favour of economic upliftment of poor. People on the other hand took it otherwise which lead to change in government.

Britain: In Britain, old currency of pens and pond was discontinued in year 1971.Government introduced new coins of 5 and 10 .The change was planned to bring uniform currency circulation. This policy was only successful in Britain while it was a failure in other sister countries.

North Korea: This kind of currency changes were announced by Dictator Kim Jong 2.Focus was to bring economic prosperity and black money eradication. Bad harvest and inflation lead to criticism of dictator’s decision. Citizens became angry as they witnessed increase in price of goods and utilities.

Ghana: Ghana saw demonetization of old Cedi 50 currency in 1982.Government issued the notion for economic rise and upliftment of its citizens. As a result of this people lost interest and belief in the country’s economic policies.

Myanmar: In 1987, military banned currency notes with a thought of ending corruption in country. Political riot spread amongst government officials and lead to death of many people. So, here also it was of no success.

Congo: Similar notion was passed by dictator Mobutu to ban usage of old currency notes in 90’s.It lead to downfall of share market and increase in price of local commodities.

Australia, United States of America and many other countries have already implemented this approach in past .Even in India; demonetization has been already implemented and announced in 1946 and 1948.Lets look forward to its effect during the long term. We are still to witness -Will it be fruitful and beneficial for a stable economy in India or not.