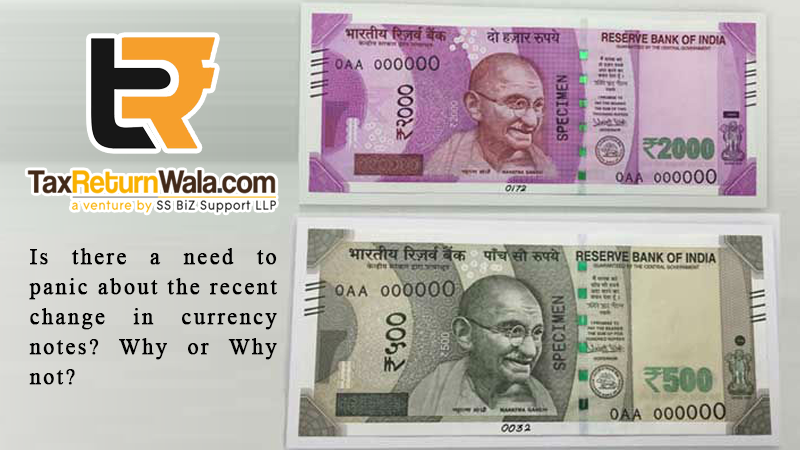 Is there a need to panic about the recent change in currency notes? Why or Why not?

At the stroke of the hour on midnight of 9th November, 2016, Prime Minister Narendra Modi announced a key economic decision, the demonetization of Rs. 500 and Rs. 1000 currency notes with immediate effect. Government has attempted to tackle issues affecting the economy i.e. to curb black money, corruption and terror financing with this move. Government also announced that new Rs. 500 and Rs. 2000 currency notes will be in circulation from 10th November 2016.

If we keep the debatable topic of being in favor or opposition of this decision, one thing everyone would agree that to a certain extent, the whole process in mismanaged. The first challenge has been observed is the public anxiety on the procedure itself. It is the job of government to explain the procedure clearly utilizing all available mass media. Another challenge people faced are likely to feel cash-strapped for the first few days. With higher denomination demonetized, there is not enough cash in lower denomination available.

Government has allotted a total of 50 days during which people can deposit their high value notes from 10th November 2016 till 30th December 2016 at office of the Reserve Bank or any other branch. Even after that one can get invalidated old currency notes exchanged in certain recognized RBI branches across the country till 31st March 2017.

Government warned that cash deposit above Rs 2.5 lakh or more in savings account or fixed deposit in 50 days till 30th December, 2016. Also deposits of Rs.12.5 lakh or more in a current account could attract a tax plus, a 200 percent penalty in case of income mismatch. But anyone in possession of Rs. 500 and Rs 1000 notes, there is no reason to panic if you can explain the source of the cash and has already paid full taxes than no penalty can be imposed. Small businessmen, housewives, artisans and workers who had cash lying as their savings at home should not worried about any tax scrutiny, as such small amount of deposits up to 1.5 or 2 lakh it would be below the taxable income.

Suppose Mr. X has 1Cr. He can deposit it in his bank account. Mr X has to have necessary documents ready to justify that the money is legal. Mr. X has to show this income while filling income tax return in the coming financial year. He can expect a notice from tax officials; however it does not mean that he will have to suffer with punishment. Because notice will start a series of proceedings where Mr. X has to prove the cash deposits, the source of income. If the tax officer is satisfied he will issue a clean chit. Otherwise, he will state the discrepancy between the reported income and actual income and calculate the penalty. The penalty can be either 50% of tax amount (for under reporting) or 200% of tax amount (for mis-reporting) depending on the nature of default. If the officer levies the heavier penalty, the onus lies on the officer to prove that mis-reporting has taken place. Therefore, even tax officer will be careful while putting the fine because he is answerable later for his decision.

Even after that Mr. X can appeal against the decision at multiple levels. So if you are not wrong, then you can get justice without any hurdle. So there is no need to panic

There is no restriction of any kind on non-cash payments by cheque, demand drafts, debit or credit cards and electronic fund transfer; it’s time to get friendly with technology. Almost all banks today offer mobile wallets. There are also many third party wallets that are accepted by many retailers, stores, even some cash operators. Even efforts are being taken to provide mobile banking facilities in non-banking rural pockets.

Arrangements have been made at international airports for foreign tourists to exchange foreign currency or old notes of not more than Rs 5000 into legal tender.

Such responsive measures would mitigate the short-term pain. This is a historical step to change currency notes and should be supported by all. Whether this decision proves beneficial or fatal it’s something which only time will tell. At this stage we can only make assumptions and be hopeful about the future outcome. Let us not panic under this circumstances rather help each other and let’s make this government’s step a success.