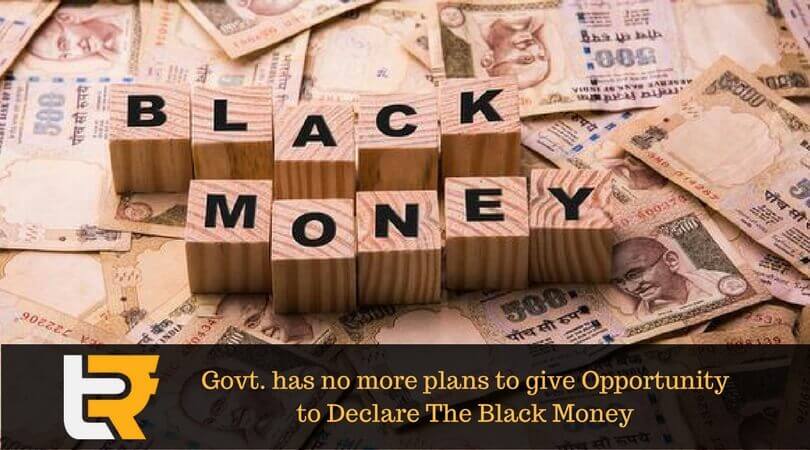 Govt. has no more plans to give Opportunity to Declare The Black Money

The heading itself is stringent enough to state that present government after launching surgical strike against black money with plenty of schemes is in no mood to forgive the black money hoarders. This article attempts to highlight schemes of Government as a counter attack on the parallel economy that has gripped the nation.

The Benami Transactions (Prohibition) Amendment Act has been brought in force from November 1, 2016. According to the new law, people caught with ‘Benami’ properties could serve up to seven years of rigorous imprisonment and have to pay a significant fine. Additionally, the properties will be confiscated. Under the Act, a transaction is named ‘Benami’ if property is held by one person, but has been provided or paid for by another person. This time Benami property not only covers Immovable property but movable as well. Government also introduced the Black Money (Undisclosed Foreign Income and Assets) and Imposition of Tax Act, 2015.

Those coming clean will have to cough up 30% tax and 30% penalty (a total tax of 60%) and avoid prosecution. The Central Board of Direct Taxes has created a special window headed by a senior income-tax official so that the declarations under the new Black Money law remain confidential. All resident persons (excluding Resident not ordinarily resident) who have undisclosed foreign assets acquired from income chargeable to tax under the Act can make declaration under this compliance window. The window to make disclosure in relation to undisclosed foreign assets is available up to 30 September 2015. The taxes and the penalty on such undisclosed foreign assets have to be paid on or before 31 December 2015.Finance Act 2015 completely overhauled Section 269SS of the Income Tax Act 1961 stating that no person shall accept from any person any loan, deposit or any sum of money,whether advance or otherwise in relation to transfer of immovable property otherwise than by account payee cheque or draft if it is Rs.20000 or more. Section 269T was changed on similar lines regarding repayment of advance of Rs.20000 or more by account payee cheque or draft.

The Scheme provides an opportunity to persons having black money in the form of cash or deposit to declare such income and pay tax, surcharge and penalty totaling 49.9 % of such declared income. Non declaration of Undisclosed Income will be liable to tax, surcharge and cess @ 77.25% along with penalty and prosecution.
Thus enough schemes have been offered to come clean to the citizens possessing black money and now if they do not declare they must be ready with harsh penalties, fines and prosecution.